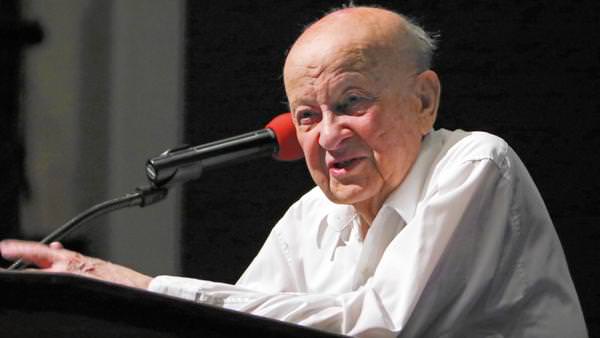 Holocaust survivor Max Epstein was a teenager when his father and most of his extended family perished in the Lodz Ghetto of Poland.

Epstein, who now lives in Highland Park, grew up as an only child in a prosperous Polish home. His father was a lumber businessman from a long line of lumber merchants.

“By 1944, there was nobody left but my mother and myself,” recalled Epstein, now 91, as he spoke Monday to Highland Park High School students during a Holocaust remembrance assembly.

That year, he and his mother were deported to the concentration camp at Auschwitz-Birkenau, where they were immediately separated. Epstein recalled being marched onto a field for scrutiny, and being selected by a German officer to work for him.

“When I came into the camp, I was 19 but I looked like I was 14,” Epstein told the students. “Six years on a diet of nothing will do that.”

Epstein said the officer told him he didn’t care what tasks he performed, he just didn’t like to see young people being beaten.

He would be sent to a series of concentration camps before the war’s end, when he was liberated by Russian soldiers while on a transport train through Czechoslovakia.

After gaining his freedom, he wrote to two uncles living in Oklahoma to let them know he was alive.

“I got a telegram back saying my mother was alive and in Italy,” he said, recalling his incredulous reaction to the news.

Epstein reunited with his mother and two months later, they boarded what he described as an “illegal” ship for Palestine because it carried passengers without immigration papers.

“There were 950 people on the ship and I was the only one with a mother,” he recalled.

Epstein would take up farming on a kibbutz and study at the Israeli Technical Institute. Later, he relocated to the United States and became a professor of electrical and biomedical engineering atNorthwestern University‘s McCormick School of Engineering and Applied Science.

Keller, a Highland Park resident, relayed how his father Robert and 49 other Jewish children were brought to the United States in 1939 by Gilbert and Eleanor Kraus. The Philadelphia couple made it their mission to remove Jewish children from harm’s way.

The couple’s courage risking their own safety to enter Nazi-controlled Austria and Berlin — with two of their own children back home — is the focus of an HBO documentary called “50 Children.”

As detailed in the film, the couple worked to secure financial affidavits from Philadelphia-area families agreeing to support the children, and persevered through setbacks obtaining 50 visas.

Also speaking to students was Holocaust survivor Kurt Gutfreund, who was born in Austria and whose father and grandfather were murdered in death camps.

At the age of five, Gutfreund was sent with his mother to Theresienstadt, a holding camp in what was then Czechoslovakia. They were liberated by the Russians in 1945.