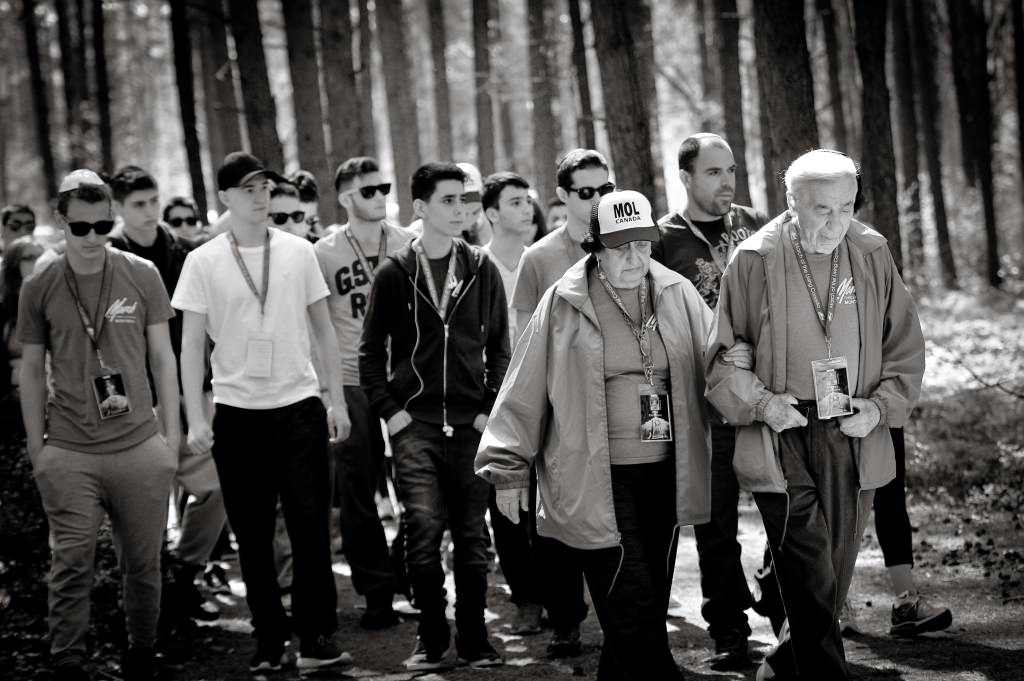 After rebuilding their lives in Canada following the Holocaust, Ernest and Ella Ehrman travel into the dark past – to help light the way for generations to come.

On a snowy day in Montreal, Ella and Ernest Ehrman sit side by side at the long dining table in their living room, pouring over their wedding album and offering up stories and homemade baked goods. Their warmth is infectious; their bright eyes belie the unimaginable pain they have endured. Just below the surface, the signs exist in the absence of pages in the photo album before 1945, or the undeniable coincidence that their home is on Korczak Crescent, named for JanuszKorczak, the Polish educator who lived and died protecting Jewish children orphaned during the Holocaust.

Ernest and Ella on the 2014 Montreal Mega Mission to Israel.

Sent to Auschwitz at just 13 years old, Ella survived through a combination of perseverance, luck, and love: “My older sister and I were in the camp together. I saved her life; she saved my life… but mostly she saved mine.” Of their extended family, they were the only survivors. After the war, Ella and her sister returned to their native Transylvania, only to see it overrun by communists. Moving on to Vienna, they were introduced to a worker from Jewish Immigration Aid Services (JIAS) that took Jewish orphans to Canada.  And so, seventeen year old Ella Ehrman found herself on the deck of a boat bound for Canada, with ten other Jewish orphans. The ride was ten days, and Ella, alone in the world, met Sarah Korman – the two girls became fast friends. Sarah had two older brothers, “the Korman boys from Poland” and from the moment they met, Ella says, “they took me in like a sister.”

Meanwhile, in Czechoslovakia, Ernest had survived the war and found his brothers and two sisters, but when the communists came to power in 1948, Ernest says, “we couldn’t live under the communist regime after just surviving Hitler.” An uncle who had made it to Canada collected enough money to apply for visas for Ernest and his siblings. In 1949, Ernest arrived in Montreal and JIAS stepped in and helped him find a job at a jewelry factory. He was paid 65 cents an hour, and he could not have been happier. Offered a promotion for his hard work, he was bumped to a full dollar, and seated on a workbench next to two brothers from Poland – the very same Korman brothers who had taken care of Ella on the boat. Quickly realizing they were both European Holocaust survivors, the brothers insisted Ernest joined them for dinner with their sister Sarah, and their dear friend Ella. “The rest,” says Ernest with a smile, “is history.”

Ernest and Ella on their wedding day in Montreal, 1955.

Ernest and Ella were married in October of 1955 at the B’nai Jacob shul on Fairmont Avenue and had two little girls. When the girls were only toddlers, an old friend from Europe suggested he and Ernest go into the sock business together. “I would never have taken the chance”, Ernest says with a smile, “if not for her. It was my wife who said if you won’t take a chance when you’re young, you never will.” The business grew quickly, and Ernest spent the next 40 years going coast to coast, selling socks and then ladies sweaters. Ernest and Ella spoke seldom about the Holocaust. “Of course, we knew each other’s stories,” says Ernest. “As soon as we met, we talked about where we had been, what we had seen.” Though they came from different places, both had lost their parents in Auschwitz’s gas chambers. “We never even spoke about it with our kids – not until they were young adults.”

Things changed in 1998, when Ernest and Ella were contacted by the Montreal Holocaust Memorial Centre. The museum was collecting testimonies for Steven Spielberg’s Film and Video Archives, part of the United States Holocaust Memorial Museum’s oral history collection. Both Ernest and Ella took part. Next, Ernest was asked to speak to a small group of students through Federation CJA.

Leading a group of Montreal students on the March of the Living in Poland.

Ernest retired in 2007 and started speaking regularly on behalf of the Montreal Holocaust Memorial Centre. The couple was approached to participate on the March of the Living and share their stories. Their eldest daughter was extremely supportive of the idea, and rallied her sister. By the time the Ehrmans boarded their flight, both girls were travelling with them.  “It was remarkable to be there with our kids,” reflects Ella. “We cried our eyes out. They will never forget it, and we will never forget it.”

Last year, Ernest and Ella participated in their 12th March of the Living, and were guests of honour on Federation CJA’s 2014 Montreal Mega Mission to Israel. Their daughter has gotten involved too, acting as a madricha (group leader) on two trips. No matter how many times they make the trip, it doesn’t get any easier. “Getting to Auschwitz, it’s like a video playing on a loop in my mind,” says Ernest.  “I can still see the last time I saw my family.” But Ernest and Ella say they will continue to participate as long as they are able, recognizing the importance of educating youth about the past in order to secure a safe and vibrant future. One thing that certainly isn’t lost on them, is that with all the pain they have endured, life has brought them the gift of love and a beautiful family: “My parents never got to meet their grandchildren,” reflects Ernest. “Ella and I have the privilege of knowing and loving our first great-grandchild. That is everything!”