Holocaust survivor Renee Salt was born in Poland in 1929. She arrived at Auschwitz at the age of 15. These are her memories: 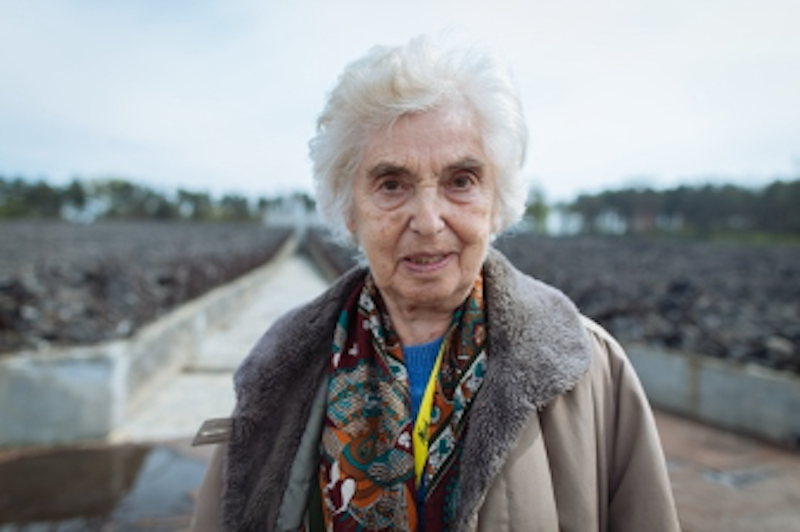 “I arrived at Auschwitz in cattle trucks, the doors were slammed shut and bolted and we were left without any food, water or air. The journey took some 24 hours. Dawn was just breaking when the train stopped. Immediately you could hear dogs barking. The Germans opened the doors and I saw an army of Gestapo and SS men, all heavily armed. All around us was illuminated electrified fencing. We were dazed, unable to get our bearings. My father jumped first and after I jumped, I never saw him again. Without a kiss of goodbye, he disappeared.

Guards moved in, shoving us into columns, some whispering,” ‘You are in Auschwitz-Birkenau, this is the place where people are being taken straight to the gas chambers”. After the selection, we were pushed to the shower room without windows. We were all saying prayers, hugging and kissing one another as we thought this was our last hour. However, instead of gas, water came through. We were the lucky ones”.

We were lined up in rows of five and taken through the camp to a large hall. On the way, we heard a most beautiful orchestra which you could hear all over the camp; after all, they had the best musicians from all over Europe.

We were told to strip and leave our clothes on the benches. Then everyone had their heads shaved. Mine wasn’t touched because my head had been shaved before. We could not recognize one another; with the cloth they gave us we looked as though we had just come out of a lunatic asylum. Then we were pushed through heavy doors to what looked like a shower room without windows. We were all saying prayers, hugging and kissing one another as we thought this was our last hour. However, instead of gas, water came through. We were the lucky ones – they still needed us for hard labor.

Renee survived. Of the over 1.5 million children murdered in the Holocaust, more 200,000 of them were murdered in Auschwitz. Children who once laughed, played, and loved. 8,000 shoes, in which they came, are now almost all that remain of their memory, but they are in danger of disappearing forever. They are in desperate and immediate need of repair and conservation.

CLICK HERE and join Renee in the global campaign to preserve and restore Auschwitz children’s shoes. Together we will preserve the memory and to defend history.