HAS THE WORLD LEARNED ITS LESSON? 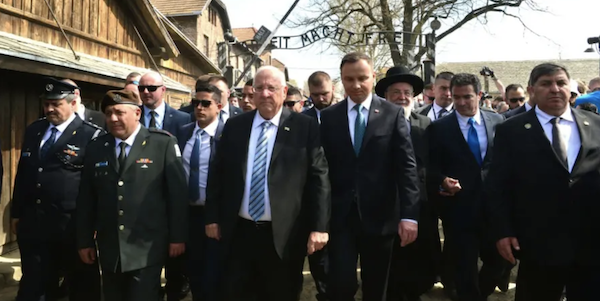 On International Holocaust Remembrance Day, Sunday, January 27, the world marks the struggle against antisemitism and racism. The preface to the UN resolution designating this special day states: “The Holocaust, in which a third of the Jewish people were annihilated, will forever serve as a warning to all mankind against the danger of free hatred, racism and prejudice.”

Now, 80 years since the start of World War II, can we say the world has learned its lesson?

Unfortunately, in recent months we have seen a perilous escalation of violence and antisemitic incidents across the world, including the massacre in October at a Pittsburgh synagogue and other anti-Israel and racist protests.

The European Union issued a joint declaration in 2018 that redefined antisemitisim. However, we do not see how these EU member states have taken upon themselves the responsibility to eradicate this phenomenon. The enforcement authorities in these countries do not implement the existing anti-racism and antisemitism laws in universities, schools, the media and throughout the public sphere.

A recent CNN poll found that one out of every five Europeans justifies antisemitism. A quarter of Europeans believe that Jews have too much influence on their economies and politics. A third think we use the Holocaust to advance our goals. One-fifth of French youth never heard of the Holocaust, while 15% of Poles and 19% of Austrians claim they do not like Jews.

This atmosphere is well felt across Jewish communities. As someone who is in contact with tens of thousands of young people from all over the world, I see and feel fear reaffirming itself in their minds and hearts. Again, Jews are debating whether to remove their kippot when they leave their homes, fearing they will be attacked. Teens are ashamed of their religion and their origin, lest they be marked as different and unwelcome. It does not happen everywhere, but it’s definitely present.

Many ask me why the March of the Living is needed. Why today, 31 years after it began, do we bring together tens of thousands of participants, alongside Holocaust survivors, state leaders, decision makers, influencers and artists, to walk the same path on the same day? My answer is simple: our mission is far from over.

While the number of survivors is dwindling and the voices of xenophobia and Holocaust denial are increasing, one of our most important tasks is to continue passing the torch of memory on to our children. Another task we have set for ourselves is to fight antisemitism and any form of racism. It is our moral duty to those who have experienced the worst crime of all, and continue to fall victim to hatred even today.

In 2018, we said farewell to Simcha (Kazik) Rotem, the last surviving fighter from the Warsaw Ghetto Uprising. We were also parted from Noah Kliger, a journalist and Holocaust survivor who accompanied the March of the Living for 30 years. Their deaths symbolize the hourglass that is running out. Every year, our nation is diminished by our being parted from Holocaust survivors. Every year, I find it more and more difficult to find those who will join us in the march, whose strength is still in their feet. We are not far from the day when the burden of memory will remain entirely on our shoulders.

Nations must take responsibility and root out the perpetrators of hatred before history repeats itself. The most important investment is, first and foremost, in the education of the younger generation. As a man who has spent his entire life in education, I know that you cannot be exposed to the horrors of Auschwitz and remain indifferent. It is impossible to deny the ravages that humanity may be subjected to after a visit to the crematoria.

My hope is that by next year we will be prouder of our actions, and that world leaders will assume greater responsibility and act more vigorously to eradicate the phenomena of hatred and antisemitism. My hope is that we, as collective humanity, will continue to mitigate hatred and violence and that Jews around the world will feel safer than ever. With this hope and message, we will march this year once again between Auschwitz and Birkenau on Holocaust Martyrs’ and Heroes’ Remembrance Day, accompanied by tens of thousands who also pledge: “Never Again!”

Dr. Shmuel Rosenman is chairman of the March of the Living.