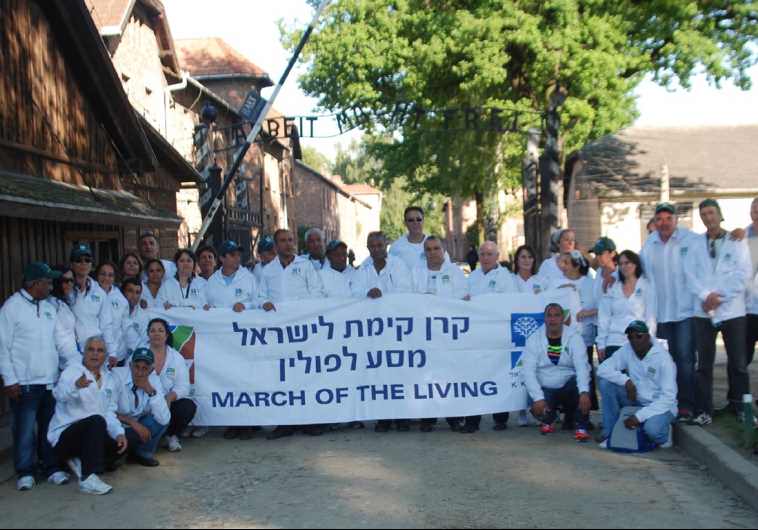 Every year on Holocaust Remembrance Day, the Keren Kayemeth LeIsrael-Jewish National Fund sends a delegation of employees to participate in the March of the Living.

In the march from Auschwitz to Birkenau, in the place where man exceeded Sakktan in his evil, the KKL-JNF expresses its historic purpose: for the Jewish People to shake off the ashes and to rise up from hell to the Land of Israel and to be a free people in their own land.

Many of the communities that helped the KKL-JNF to acquire land in Israel, even before the Second World War, are lost and no more. Moving testimony to this is a crushed “Blue Box” found in the ruins of the Warsaw Ghetto. Even in the most difficult moments of their lives, the ghetto fighters drew hope of saving themselves from the inferno and arriving in the Land of Israel.

The KKL-JNF took upon itself the moral commitment to act on behalf of the Holocaust survivors. For many years the KKL-JNF took care of the possessions that Jews had entrusted it for protection. Many assets have been returned to the heirs, but much unclaimed property of families that were completely wiped out remains in the hands of the KKL-JNF.

The KKL-JNF invests enormous resources to preserve the memory of communities that were lost. Many memorials have been established in KKL-JNF forests so that the family members that were saved will have a place to commune with the memory of their deceased loved ones.

The Sacred Forest is a wonderful example of this. The KKL-JNF turned a rocky area in the Jerusalem hills into a flourishing forest of 6 million trees, a tree for every Jew that perished in the Holocaust. Each tree is a green yahrzeit candle that not only transmits the message of remembrance but also a message of a reborn people rising out of the heaps of rubble.

With the help of the B’nai B’rith movement, the KKL-JNF set up the Scrolls of Fire Monument, the inspiring creation of sculptor Nathan Rapoport. The enormous monument is made of bronze and enhanced with parchment scrolls. One scroll describes the destruction and the catastrophes that plagued our nation and the other scroll our revival.

I would also like to note a special monument to the Jewish community of Libya that the KKL-JNF set up just over a year ago in the Ben-Shemen Forest. The monument, a creation of the artist Daniel Kish, comprises of stone columns which form a Magen David.

In the Second World War, the Italian administration in Libya – an ally of Nazi Germany – was suspicious of the Jews. Many were sent to the concentration camp in Jado in Libya and to other camps. The harsh conditions led to the death of 600 out of the 2,600 Jews that were sent to the camp.

Between January 1943 and February 1944, Jews of foreign nationality were sent to Europe and from there to the concentration camps Bergen-Belsen and Innsbruck-Reichenau. More than 700 Libyan Jews died in the Holocaust. The monument in the Ben-Shemen Forest, donated by the Friends of the KKL-JNF of Italy, does historic justice to this community whose suffering in the Holocaust many of us are unaware of.