From SOUL to SOLE: Urgent preservation of the children’s shoes at Auschwitz 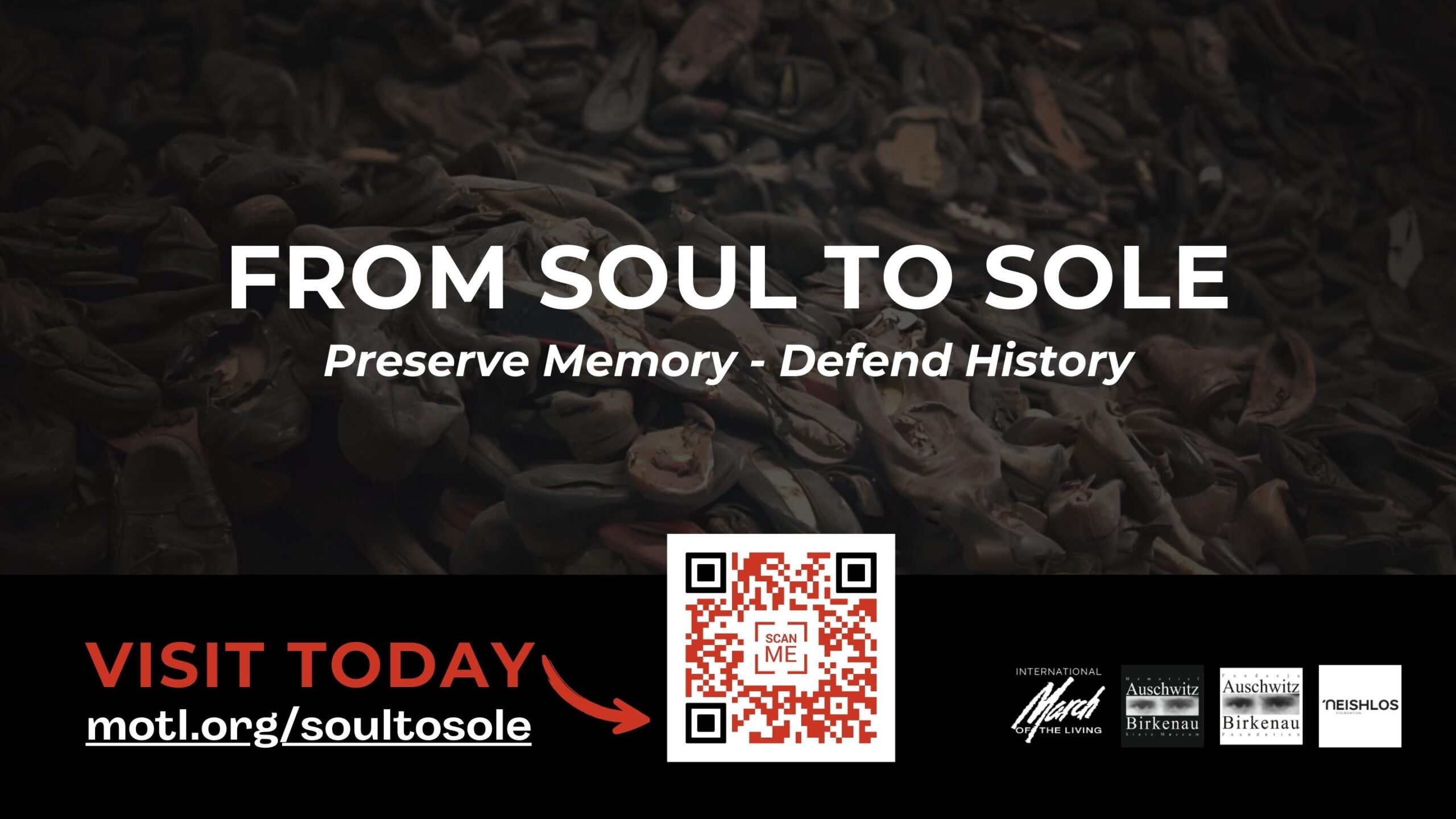 International March of the Living partners with the Auschwitz-Birkenau Foundation, the Auschwitz Memorial, and the Neishlos Foundation for a global campaign to preserve the shoes of children murdered in Auschwitz.

More than 8,000 shoes stored at the camp found to be rapidly disintegrating with the passage of time.

Holocaust survivor Arie Pinsker, who was a child at the camp, burst into tears at the sight of the tiny shoes: “It’s so hard for me to look at these shoes. I see them and think how maybe my twin sisters’ shoes are here too”

Wednesday, 21 September 2022, Auschwitz, Poland – International March of the Living has announced a partnership with the Auschwitz-Birkenau Foundation and the Auschwitz Memorial to launch a global campaign to preserve some 8,000 shoes belonging to children, most of them Jewish, who were in vast majority murdered in the German Nazi concentration and extermination camp Auschwitz. The Foundation announced that, without immediate conservation, these shoes are in danger of disappearing as historic documentation of life and death. With an initial donation from the Neishlos Foundation, work would be to conserve the shoes, while a global campaign was launched to support the ongoing project.

Auschwitz-Birkenau survivors Arie Pinsker and Bogdan Barnikowski – both of whom were children when they arrived at the camp – participated in the ceremony that took place in the Conservation Laboratories at the Auschwitz Memorial. Along with them at the ceremony were the CEO of the Auschwitz-Birkenau Foundation, Wojciech Soczewica, the director of the Auschwitz Memorial, Dr. Piotr M. A. Cywiński, President of the International March of the Living, Phyllis Greenberg Heideman, and Founder and President of the Nieshlos Foundation, Eitan Nieshlos.

As part of the ceremony, Arie Pinsker told how he lost his entire family in the gas chambers of Auschwitz II-Birkenau, except for his older brother who saved his life. Arie was part of an experiment conducted by the Germans on Jewish children in the camp. Of the 1,000 children who were in his barrack enduring the experiments, only 4 survived the War. Arie burst into tears at the sight of the tiny shoes and said “It’s so hard for me to look at these shoes. I see them and think hoe maybe my twin sisters’ shoes are here too.”

International March of the Living Chairman Dr. Shmuel Rosenman and President Phyllis Greenberg Heideman: “When we received the request from the Auschwitz-Birkenau Foundation to preserve the shoes of children murdered in the camp, it was clear that this is a moral obligation we would take upon ourselves. We see the conservation of the shoes of these innocent children as an eternal testimony to the brutality of the Nazi regime as well as a significant educational initiative. We believe that everyone who has ever participated on the March of the Living and others around the world will want to take part in preserving the memory of the children and protecting these deteriorating artifacts from this dark chapter in history.”

Approximately 1.1 million people from across German-occupied Europe were murdered in Auschwitz-Birkenau. Among 1.3 million people deported to Auschwitz there were some 232,000 children up to the age of 18. The largest numbers of children arrived at the camp in the second half of 1942. The majority of them were Jewish children who were immediately murdered in gas chambers upon their arrival.

When Soviet troops liberated Auschwitz on January 27, 1945, there were only about 500 children under 15 years of age left in the camp, all suffering from diseases and malnutrition.

The conservation project will continue for two years. International March of the Living is pleased to announce and initiate a global fundraising campaign for this project under the theme “From SOUL to SOLE.״

The initial contribution to begin this initiative has been received from Eitan Neishlos, founder and President of the Neishlos Foundation, and the grandson of Holocaust survivors. Eitan serves as Founder and Ambassador of the March of the Living organization in the Gulf States, and represented the Third Generation at the 2022 March of the Living carrying with him a shoebox belonging his late grandmother Tamara Zisserman left him, containing her memories of the Holocaust.

Eitan Neishlos: “In so many cases, the tiny shoes left at Auschwitz are all that is left of young Jewish children murdered by the Nazis. In these shoes they took their final steps as they were ripped from their mothers’ arms and led to their slaughter. Their shoes were stripped from them mercilessly, as were their names, their dreams, and futures. By preserving these iconic shoes, we are preserving the memory of Jewish children who were the victims of perhaps the Nazis’ most harrowing cruelty. It is our responsibility as the next generation to keep their memories alive and give them a voice from the darkness”. Now is the time for our generation to do whatever we can to preserve the memory of the victims and honour the precious living survivors”.

Dr. Piotr M. A. Cywiński, Director of Auschwitz Memorial, President of Auschwitz-Birkenau Foundation: At the travelling exhibition “Auschwitz. Not so long ago. Not so far away” co-created by the Auschwitz Memorial, one of the objects that speaks most to the emotions of visitors is a child’s shoe with a sock in it. At the Memorial itself, for many people one of the places that moves them most is the room where several thousand shoes belonging to the youngest victims are displayed. There is nothing surprising in this, as through the tragic fate of the children in the camp we are able to look into the limitless depths of human evil at Auschwitz. The murder of over 200,000 children at Auschwitz is impossible to comprehend. This cruelty and injustice cannot be explained by any politics, any ideology, any worldview. The contrast between the cruelty and callousness of the adult world is perhaps most vividly illustrated in Auschwitz precisely in the juxtaposition with the trusting, curious, innocent and defenseless children who were thrown into a world they could not understand. And this world is preserved in every single shoe. Only these shoes remained after so many children. That is why we must do everything to preserve them for as long as possible.”

Wojciech Soczewica, Director General of Auschwitz-Birkenau Foundation: “The tiny shoes of the youngest victims of Auschwitz are a special symbol of the crimes perpetrated there. They require preservation, like all other personal items saved by the Museum’s conservators, but they evoke a sense of even greater responsibility on the part of our generation to preserve them for the future. That is why the Auschwitz-Birkenau Foundation has decided to initiate this unique campaign to secure funding for the conservation process of all the children’ shoes that the Museum takes care of. I would like to thank the Foundation donors and in particular the International March of the Living for their partnership – they have been marching for over 30 years to remember the victims that were murdered in the concentration camps”.

We invite you to take an active part in preserving memory and defending history.

Holocaust survivor Miriyam Harel, who was a child in the ghetto and a teenager in the camp, says that she saw all the horrors: “I arrived in Auschwitz towards the end of the war in 1944. To this day, when I close my eyes, I see the “blood path” in Auschwitz. They forced us to run barefoot on a seven-meter path on broken glass – holding the shoes in our hands. if one who made a sound – he was shot dead on the spot. Even though I felt the stabs of the glass I didn’t say anything. We did everything to live.”

Holocaust survivor Paula Lebkowitz talks about the moment at the end of the war when she found shoes in the camp: “I will never forget the moment I found shoes in Auschwitz. I found different shoes and boots that were big for me, but I was so proud of myself! Until then I had nothing, and from the moment I had the shoes I felt rich.” Before the war, Paula’s grandfather had a shoe shop where the family members worked in, until the Germans deported the family from the city in 1940. When Paula arrived at Auschwitz, she was only 10 years old. Her father was murdered in the camp during Rosh Hashanah in 1944. Her two sisters, Chaya and Hana, were also murdered.

PHOTO CREDIT: Tali Natapov/Neishlos Foundation
Captions
Photo 1: Auschwitz survivors Arie Pinsker (left center), and Bogdan Barnikowski, (right center) hold the shoes of child victims of the Nazis in the Conservation Lab in Auschwitz, joined by representatives of March of the Living, the Neishlos Foundation, and the Auschwitz-Birkenau Foundation.
Photo 2: Holocaust survivor Arie Pinsker (92) inspects the collection of victims’ shoes on display at Auschwitz-Birkenau. Arie’s mother, father, and nine siblings were murdered in the camp by the Nazis. A subject of medical experiments during his time there, Arie survived the Holocaust and moved to Israel.
Background information: The Children of Auschwitz

Approximately 1.1 million people from across German-occupied Europe – of whom 1 million were Jewish – were murdered in Auschwitz-Birkenau during the Shoah. Among people deported to Auschwitz there were some 232,000 children up to the age of 18: 216,000 Jews, 11,000 Roma and Sinti, over 3,000 Poles, over 1,000 Belarusians & some Russians, Ukrainians and others

The majority of Jewish children that were deported to Auschwitz were immediately murdered in gas chambers upon their arrival a with virtually no chance for survival.

The largest numbers of children arrived at the camp in the second half of 1942 in the transports of Jews deported from Slovakia, occupied France (Drancy camp), the Netherlands and Belgium, and later in 1944, when Jews were deported from what is currently Hungary.

Those selected for labour sometimes included a small number of children, boys and girls, who looked older than they were. Sometimes the children themselves, advised by the adults, would add years to their age, trying to convince the selectors that they are capable of hard labour, sensing that this would be their only chance to survive.