From Darkness into Light: The Promise of Israel By Orli Kessel, 2013 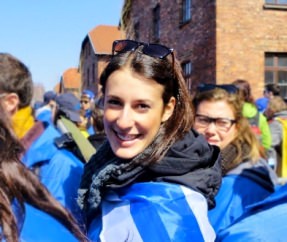 Arriving at the airport in Warsaw and preparing to board our El Al flight to Tel Aviv, I felt a sense of urgency. My desire to leave Poland and arrive home in Israel had reached a fever pitch. As we waited in line to clear security, all I could picture was boarding the flight and the wheels of the plane lifting off Polish ground. Finally, I was leaving – escaping the grey skies and damp, gnawing cold which had served as a fitting pathetic-fallacy for the emotional landscape we had travelled over the course of our six days spent in Poland.

As I took my seat on the plane, I closed my eyes.

It had been a week of excruciatingly long days filled with an overwhelming amount of information rife with emotional intensity -- I was exhausted.

My eyes had been shut for less than a minute when the singing began.

Startled, I turned around and found roughly 150 high-school age March of the Living participants from various cities and countries, arms around each other, singing ‘Oseh Shalom’ with what can only be described as joyful abandon.

In that moment, the sleepless nights dissolved and without a moment’s pause, my fellow Young Adult MOTL participants and I joined in the song. Looking around, I noticed flight staff unable to hold back smiles as they half-heartedly encouraged us to sit down so that we could take off.

Ten minutes went by before we were all back in our seats and the fasten seatbelt light went on for takeoff. Our group moved quickly through the empty arrival gate and I slipped outside into the arrivals parking lot of Ben Gurion Airport. The electric doors slid open and a rush of warm, humid air filled my lungs.

I breathed in Israel, I was home. I sank down on a bench outside and could barely contain my euphoria.

I know it’s not unusual to remember significant departures and arrivals. However, the reason these two moments stayed with me, and seem to have become so engrained in my consciousness, has less to do with the physical shifts that occurred and more to do with the emotional impact of the transition.

Practically speaking, the act of leaving Poland and arriving in Israel can be understood from a purely geographical perspective. However, the mileage, climate and time zone have little real baring on the magnitude of the shift that occurred when I transitioned from one country to the other.

It was expressed in varying ways many times during the March of the Living that the structure of this experience was intended to move us from “darkness into light”. I can’t imagine a more apt way of describing how it felt to transition from the ashes of Warsaw and Krakow and arrive in Israel to the shores of Tel Aviv and Haifa. To my eyes, fresh from the gas chambers of Auschwitz and the mass graves of the Lupachowa Forest, Jerusalem’s cobble stone streets had never looked more paved in gold or felt more hallowed.

Now, home in Toronto, the time I spent in Israel after Poland has taken on new meaning. At the time, the transition felt like the only conceivable antidote to an emotional wound that had left me ravaged after 6 days spent entrenched in the atrocities of the Shoah.

However, nearly a month out from the experience, I have come to see my time in Israel not only as the remedy that soothed me – but, more importantly, as a touchstone that I carry with me, regardless of where I am in the world.

Like my ancestors before me wandering the Egyptian desert, while I was in Poland, the promise of Israel gave me hope and sustained me.

Though I would never presume to speak for the prisoners of the Nazi death camps, I have heard from a number of survivors that even without any idea of what Israel was like; it was this notion of one day reaching the Promised Land that helped them to hold on day after day.

Ultimately, what I have taken away from this particular trip is a simple truth; Israel is so much more than simply a place on the map.

Among innumerable other things, Israel represents freedom from anti-Semitism, the promise of human dignity for all, hope for a better future and is, I believe, the soul of the Jewish people.

Whether I am blessed to be standing in the Old City of Jerusalem or on the busy streets of Toronto, Israel is never far from my heart for I carry her with me wherever I am.