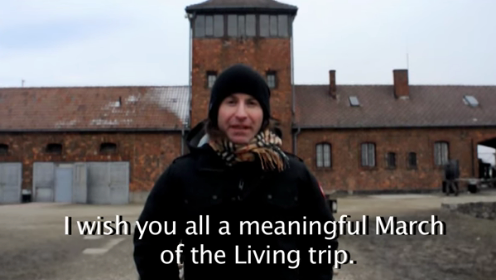 The trip was organized by the March of the Living, an international educational institution dedicated to teaching the lessons of the Holocaust and to combatting prejudice, intolerance and hate.

“I just walked from Auschwitz to Birkenau –  It’s been very intense and emotional today,” the acclaimed guitarist said, after visiting the world’s largest and most notorious former death camp, where over 1 million innocent men, women and children – the vast majority Jews- were gassed to death, during the Nazi Holocaust.

Mr. Kanter was accompanied by David Wajntraub and Lukasz Dlugolecki, both of whom have their own personal connection to the Holocaust. Kanter and Wajntraub then walked the 3 kilometre distance separating Auschwitz and Birkenau, following in the same path March of the Living students from around the world trod upon each year.

Lukasz Dlugolecki, a film student at the Polish National Film School, shared the story of his great uncle Witold Pilecki who volunteered for the Polish resistance to get imprisoned at Auschwitz in order to gather intelligence. He was the author of the Witold Report, the first intelligence report on Auschwitz, which allowed the Polish government-in-exile to persuade the Allies that the Holocaust was in fact taking place. He survived WWII only to be executed by the Communists after the war.

“It was very meaningful for me to look at my uncle’s photo in one of the rooms of the museum. It always gets me thinking about what it means to know how to act when the situation is getting extreme. There is of course a feeling of being proud of my ancestor, but on the other hand it leaves me always with concern about myself and my own backbone, my own moral courage, and what I would do under similar circumstances.”

“It was a pleasure to meet Dan – he  is a highly modest and thoughtful person. His interest in coming to Auschwitz, as I told him, was very admirable – to use an opportunity to visit a place, which is connected to world history, Jewish heritage, but most important, is a monument, which asks universal questions about humanity.”

David Wajntraub, who currently lives in Israel, but guides March of the Living groups in both Poland and Israel, has deep roots in Poland. His  grandfather served in the Polish army before WWII, and his father was jailed by the Polish communists for his Zionist beliefs, then exiled from Poland in 1968.  Many of his family members perished in the Holocaust but their exact fate is unknown.

“A few days ago I met Dan Kanter, an amazing Jewish man from Canada touring Poland with Justin Bieber. He was adamant about going to Auschwitz – and it was evident by talking to members of the crew, that counted 160 people, that Daniel had let everyone know about his will,” Mr. Wajntraub said.

As we neared the gate of the infamous former death camp, we observed that, “We are entering Birkenau because we want to –  and we will leave whenever we want to”.

“As we crossed the gate we embraced in a long hug”, he said.

“I feel honored that I was able to accompany Daniel on this pilgrimage – it is a trip that I believe every man,woman and child should make once in a lifetime.”

“In the car on our way home I told Daniel that I was very impressed that a major star like him doesn’t forget who he is and where he came from.”

Eli Rubenstein, Director of Education for March of the Living International (which organized the visit), praised Mr. Kanter for taking the time out of his busy touring schedule to make the trip.

“It must have been a very long day for Dan, getting up at 5 am, and traveling for 7 hours by car from Lodz to Auschwitz, and then doing a full concert with Justin Bieber that same night”, he said, “. I am heartened he had such a meaningful experience visiting this most sombre of places, where the echoes and ghosts – and lessons – of history are ever present.”

Mr. Kanter also had a special message for the March of the Living students who will be traveling to Poland in early April, and marching from Auschwitz to Birkenau on Holocaust Remembrance Day to commemorate the millions murdered in the Holocaust:

“I wish you all a meaningful March of the Living trip and I also wish you a great trip to Israel, one of my favourite countries in the whole world. I have many incredible memories there including meeting my wife Yael there on Birthright and a very special show that we played with Justin in Tel Aviv in 2010.”

“I hope you all have a memorable experience”, he said.