Calling from the darkness: Music written by Holocaust victims recorded in new album 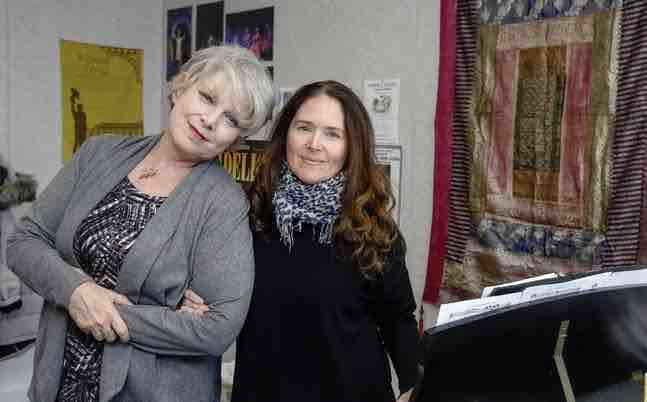 University of Iowa music associate professor Rachel Joselson (left) poses for a portrait with professor of piano Rene Lecuona in Joselson’s rehearsal studio and office at Voxman Hall in Iowa City, Iowa, on Friday, Dec. 16, 2016. Joselson has recorded songs, accompanied by Lecuona, written by Holocaust concentration camp inmates. Joselson has released a CD of the music and will be performing it at the United Nations. (Jim Slosiarek/The Gazette)

From behind barbed wire and prison walls, as they watched friends and family members be sent to their deaths and wondered if they would ever be free, the inmates of Theresienstadt concentration camp composed music.

Also know as Terezin, the Holocaust prison camp was situated northwest of Prague in what is now the Czech Republic. The Nazis sent many musicians, composers and artists there, and the inmates composed hundreds of songs, both vocal and instrumental, as they endured their internment.

When University of Iowa music professor Rachel Joselson, who is Jewish, heard one of those songs for the first time, on a recording by Anne Sofie von Otter, she was hearing echoes of their voices, calling from the past. She wanted to hear more, and to help those voices keep calling, so she set out to find more music composed at the camp. Colleagues in Germany and Israel sent her what they had, much of it unpublished.

“Some of it somehow had been secretly removed from the camps, other songs were found once the war was over and the camps were liberated,” she said. “A lot of music was destroyed, so we’ll never see it.”

In June, she release a CD, “Songs of the Holocaust.” Joselson, a soprano, sings on the album, accompanied by UI professor and pianist Rene Lecuona. Violinist and UI associate professor Scott Conklin and cellist and former UI School of Music lecturer Hannah Holman contributed on songs as well.

Joselson said the first time she performed the music at her synagogue’s Holocaust remembrance ceremony, she had to pause a few times to regain her composure.

“Even though I didn’t grow up as a very religious Jew, I still have that cultural background,” she said. “I feel a deeper personal connection to these composers than I do when I record other music.”

She said the response to the album and music has taken her by surprise, as she has received invitations to perform the songs around the country, including an upcoming performance scheduled at the United Nations Holocaust commemoration ceremony Jan. 27.

“When I did this recording, I had no idea how much interest it would have and how much it would take off,” she said “Many survivors have come to these concerts, and I don’t know how much longer they’ll be with us. It’s very, very meaningful to them. They’re very moved.”

The Nazis intended Terezin to be a propaganda camp, a place they once brought the Red Cross to show how well they were treating the Jews. But the deception was a flimsy disguise of the camp’s true horrors. Of approximately 140,000 Jews who were taken to Terezin, nearly 90,000 were sent on to death camps like Auschwitz-Birkenau, and around 33,000 died in Terezin itself of malnutrition and disease. The album includes music written by Adolf Strauss, Viktor Ullmann, Carlo Taube, Isle Weber, Gideon Klein and James Simon, none of whom survived.

“Whenever I take on a piece, I try to honor the composer and take that on,” Joselson said. “I definitely want to expose the world to these songs and interpret them to the best of my ability.”

The first half of the album is music written by the inmates. The second half is music composed by Norbert Glanzberg, a Polish Jew who survived World War II by hiding in unoccupied France until 1944. He composed “Holocaust Lieder” based on a collection of writings entitled “Death is a Master of Germany,” by both Jewish and non-Jewish resistance fighters who were imprisoned in concentration camps.

Joselson said she hopes recordings such as hers can help keep those testimonials alive.

“Most people aren’t accustomed to hearing songs from Holocaust victims,” she said. “Anything that helps people to remember the story and what happened is helpful.”

What: Faculty showcase: Rachel Joselson and Rene Lecuona, “Songs from the Holocaust”