At March of the Living, learning how to live 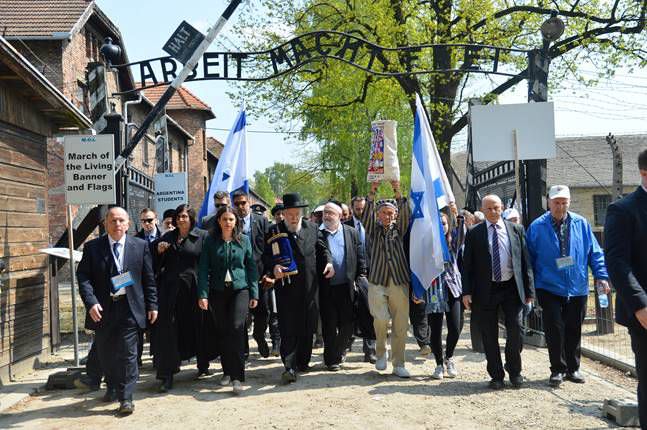 We all shared the same experience on May 5 — the 28th annual March of the Living, a 1.86-mile walk from Auschwitz to Birkenau as a tribute to victims of the Holocaust. But we took vastly different journeys to get there, and we arrived at the former death camp sites with divergent emotions.

Worstman — who marched with a sign bearing the name of her great-uncle, Holocaust victim Abraham Rotenberg — called the experience “overwhelming.” She said she “can’t really imagine people being here” at the Auschwitz concentration camp during the Holocaust, given that the site now features a “pretty garden.”

Unlike Worstman, Zoller has no direct familial connection to the Holocaust. His father’s family left Poland and his mother’s family left Lithuania, both before World War II. When he spoke with me, he was in the midst of struggling to connect with the Auschwitz experience. “I think it’s been a little hard for me to step into the situation, it’s not so relatable,” he said. At the same time, Zoller, who was traveling with peers from the Yavneh Academy of Dallas, considered the two-week March of the Living educational trip to Poland and Israel a “good way to come together” as a class of high school seniors.

Peltz spent the Holocaust in a ghetto about 60 miles from Auschwitz. He said that being at the march with so many teenagers — among a total crowd of 10,000 youths and adults — “gives me new life, new uplift, new hope for the Jewish future.” Peltz had viewed himself as a “Polish citizen of the Jewish religion,” only to see that status “turned into destruction.” But he has returned to Poland several times since the Holocaust and cherishes the opportunity to spend a few dollars locally, just to prove that his destruction never materialized. I immediately thought of him when I passed a snack bar during the march.

Then there’s that 30-year-old journalist — me. I was left wondering, both before and after visiting Auschwitz and Birkenau, why I didn’t participate in March of the Living when I was younger. When I was more naive. Before I became all too well-versed in the horrors of today, not to mention the horrors of the past. Before tragedies and atrocities became nothing more to me than headlines and obligatory assignments. Before I became desensitized to news stories of all varieties. My wife will literally cry when she reads about a tragic news event. I’ll digest the same event without batting an eye.

My desensitization has even carried over to the Holocaust. When I survey my employer’s news content on a daily basis, I can’t help but sometimes roll my eyes when I see that seven decades later, seemingly 20 percent or more of our content still relates to the Holocaust. Why do Jews constantly focus on their victimhood of the past rather than their strength in the present? Israeli-American actress Natalie Portman articulated this sentiment in August 2015, controversially questioning “how much at the forefront we (Jews) put Holocaust education.”

“We need to be reminded that hatred exists at all times and reminds us to be empathetic to other people that have experienced hatred also. Not used as a paranoid way of thinking that we are victims. Sometimes, it can be subverted to fear-mongering and like, ‘Another Holocaust is going to happen,’” she told The Independent.

Portman’s words are a bit harsh — particularly her description of Holocaust education as “fear-mongering.” But her comments do resonate with me in some respects. Why do Jews feel the need to compare current hostile actors, such as the theocratic Iranian regime or Palestinian terrorists or boycotters of Israel, to the Nazis? Why does anyone compare current genocides to the truly incomparable Holocaust and its 6 million Jewish victims? Perhaps most egregious of all, why does anyone compare Donald Trump to Hitler? Regardless of your preferred candidate in 2016 … really? With analogies like these, the Holocaust loses its meaning. And when anything gets trite, I get fatigued. I might very well be guilty of “Holocaust fatigue.”

But I don’t want to feel that way. My late grandparents on my mother’s side survived the Holocaust. For a grandchild of survivors, the Holocaust should be consistently meaningful. Therefore, beyond my professional duties of covering March of the Living as a journalist, I hoped that the event would help cure my fatigue and desensitization.

I wasn’t cured in a day. I didn’t even cry. But fittingly, what might have put me on the path to being cured was others’ desensitization. As I toured the barracks of Auschwitz, I came across a group of Polish-Christian students. The first student called Auschwitz “a very sad place,” but when asked if he felt a connection with the mass extermination of Jews during the Holocaust, he responded with a flat “no.” The second student noted, “Lots of [non-Jewish] Polish people also died here and the Second World War changed the world.” His thoughts on the Jews’ Holocaust experience? “I’m not sure, really.” Attempting to answer again, he said, “I see how they … ”—but stopped himself in his tracks, waving the white flag and saying he “can’t think of anything.”

I’m not trying to publicly shame these 16-year-old students. That’s why I’m leaving out their names. But their lack of empathy for the Jewish people’s Holocaust suffering was striking. I was somewhat offended, even though I’ve long been guilty of the same offense — desensitization.

Later, on the march itself, I had a much different conversation with Christian visitors of Auschwitz — Arjen Lont, an honorary consul of Israel in Holland, and his wife, Nellie, who were participating in March of the Living’s program as part of a relatively small 26-person delegation. They displayed the ultimate empathy and solidarity with the Jewish people.

“We serve the same God and that’s why we feel so strong together,” Arjen said. Nellie expressed pride that among Israel’s 80 honorary consuls around the world, her husband is the only Christian of the bunch. It’s “too big to understand what happened here” at Auschwitz and Birkenau, Arjen said. Seeing the myriad Israeli flags that marchers carried and draped around their bodies at the former death camps gave Nellie “hope,” she said.

The contrast between the Polish students and the Lont couple helped me understand why March of the Living exists. Its mission statement says that the two-week trips are held “to study the history of the Holocaust and to examine the roots of prejudice, intolerance, and hate.” That’s fairly straightforward. But my day at Auschwitz and Birkenau, when viewed against the backdrop of the career journey I took to get there, taught me that the trip’s role is also to ensure that our young generation isn’t fatigued or desensitized like I’ve been, to make sure that young Jews not only learn about the Holocaust, but feel the Holocaust, to help young Jews not only feel the Holocaust, but also have empathy for victims of other genocides, attacks and tragedies.

Even as he struggled to find a personal connection, 18-year-old Benji Zoller was making progress and sounding empathetic beyond his years. He brought up the Torah portion of Kedoshim and its famous verse, “Love your neighbor as yourself.”

“We don’t let these things repeat itself,” he said of the Holocaust. “We are upstanding members in this society. … We don’t watch other people be oppressed, and we find a way to stand up.”