An 88-Yr Old Holocaust Survivor Recalls Hearing — “We Are Americans and You are All Free.” 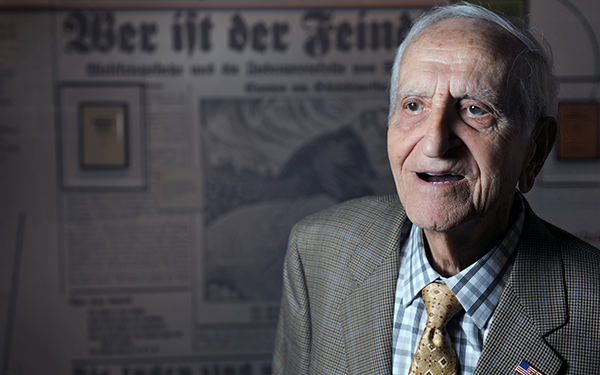 “We are Americans, and all of you are free.”

That phrase is etched in 88-year-old Henry Greenbaum’s memory as part of the best day of his life. It was told to him by an American soldier during World War II when he was 17, weighed 75 pounds and had lived through five hellish years as a victim of the Holocaust.

Holocaust survivor Henry Greenbaum, who was born in Starachowice, Poland, in 1928, volunteers much of his free time telling his story and educating the masses on the atrocities of the Holocaust at the U.S. Holocaust Memorial Museum. DoD photo by Marvin Lynchard

Thursday is Holocaust Remembrance Day, which shines a light on the genocide of millions of people more than seven decades ago. It’s meant to keep such atrocities from continuing to happen, and it’s also a day to remember those who put an end to it, including the United States military.

That’s how I found my way to Greenbaum, a Jewish survivor and volunteer at the U.S. Holocaust Memorial Museum in Washington, D.C. The Poland native was liberated in 1945 by U.S. soldiers from the Army’s 11th Armored Division, and he had no problem recounting that experience, amid many others, in vivid detail for me – like not bathing for years, or surviving being shot in the head.

What struck me most, however, was the ease with which he told the stories, almost as if they didn’t happen to him. But they did, and he credits America for bringing him back from the dead.

Henry was just 12 and the youngest of nine children – six girls, three boys – when the Nazis forced his family into a ghetto. But it wasn’t until two years later, in 1942, when the real nightmare began – the day his mother and two of his sisters were taken.

“When they separated from me, [mom] went to give me a hug … but they pushed her back. So she yelled over to [three of] my other sisters, ‘Make sure you take care of your little brother.’” And that was the last he ever heard from them. “That day, vividly, was the most horrible thing.”

Henry was then moved to a slave labor camp, where everyone got lice – a breeding ground for typhoid.

Greenbaum displays the prisoner “tattoo” he received during the Holocaust. DoD photo by Marvin Lynchard

“It was a very contagious sickness, and you’re sleeping with two other guys in a 75-inch wide shelf with no mattress, no straw,” Henry recalled. “They gave us a rolled up little blanket that we used as a pillow. Otherwise, there was a bolt sticking out into your neck.”

He was often forced to dig mass graves for the dead and dying.

“People had to undress naked. They were shot in the back of the head, and into the ditch they went,” Henry remembered.

Two of Henry’s sisters died of illness, while a fifth was killed when the pair tried to escape. Henry was shot in the head, but somehow survived.

Henry spent two more years in various concentration camps before April 25, 1945 – “the best day of his life.” Without skipping a beat, he recalled how he and several others were sent on a death march toward Dachau.

“We knew the night before liberation that [our captors] were acting a little bit better all of a sudden. They knew they were losing the war. They probably wanted to kill us, but they were afraid to fire their guns, because the American Army was on the highway,” Henry remembered. “We didn’t know that.”

An American soldier looks at the corpses of Polish, Russian and Hungarian Jews found in the woods near Neunburg vorm Wald, Germany (Bavaria). That’s where Greenbaum was found alive. Photo courtesy of the National Archives and Records Administration

They were hidden in a farmer’s silo instead of sleeping out in the open that night. In the morning, they were given one raw potato – “Otherwise, we were eating leaves that fell off the bushes,” Henry said – before being ushered toward the highway. That’s when the men guarding them fled.

“All of a sudden, off the main highway, a tank came toward us. We thought, ‘For sure they’re going to kill us all now,’” Henry said. “We didn’t think it was an American tank until they parked 5 feet away and the hatch opened up, and [a soldier] put his hands on his mouth and said, ‘We are Americans, and all of you are free.’”

Henry and the remaining survivors, dumbfounded, were given all the rations the two American soldiers in the tank had.

“I don’t know their names, so I call them my angels,” he said.

The survivors were then escorted back to the farm from which they came.

“We were so hungry – five years hungry – that we saw in the front of the farmer’s house they had mixed up potato peelings and white flour as animal feed. We got on our hands and knees and shoved as many peelings as we could into our mouths,” Henry said. “Then we went in [the farmhouse]. … They had for us a table with regular, normal food. … We didn’t think we’d get the food inside.”

After liberation, Henry managed to find one brother, Zachary, while regaining his strength in a displaced persons camp. “I was a skeleton. They told me I weighed 75 pounds at liberation,” he said.

Four young Jewish men stand in front of an UNRRA Assembly Center sign in the Zeilsheim displaced person’s camp after the war. Henry Greenbaum is on the far right. Photo courtesy of the U.S. Holocaust Memorial Museum

Aside from the physical torture, I’ve always wondered how a person survives that kind of mental trauma. For Henry, it was pretty simple – hope.

“I said to myself, if I beat all these odds, I’ll be in America someday,” referring to his last surviving sister, Dina, who had fled here in 1937. “I was thinking about once I get to this country and what my life will be here. I was lucky to have a sister who could help me survive.”

Henry immigrated to America in 1947, and he, Dina and Zachary were able to find their last brother, David, who fled to the U.S. in 1941. Of their 10 family members who were alive when the Holocaust began, only those four survived.

Greenbaum autograph his “passport” at the U.S. Holocaust Memorial Museum. The passports of varying Holocaust victims are given out to every person who visits the museum. Greenbaum is featured on one of them. DoD photo by Marvin Lynchard

Henry went on to live a good life. He became a tailor, married and had four children.  As I talked to him just days after the 71st anniversary of his liberation, he had a simple message for any remaining World War II vets out there: “Thank you for serving, and thank you for giving me back my freedom.”

Freedom is currently being fought for once again in Syria, Iraq and many other parts of the world facing similar atrocities. Henry’s experiences help give our current troops’ mission perspective.

U.S. Army veteran Charles Clymer (middle) and Dr. Garland Watson (right) pose for a selfie with Greenbaum during his hours of volunteering at the U.S. Holocaust Memorial Museum. DoD photo by Marvin Lynchard

“They are risking their own lives. We [Americans] don’t get anything out of it – we just want those countries to live free like we live,” he said. “It’s the best thing when you have freedom – to be able to do what you want.”

It’s a lesson he has spent his adult life teaching others. He talks with lots of service members who visit the museum, and he’s even visited Fort Campbell, Kentucky, three times to talk to soldiers and their children.

“I tell the schoolchildren whenever I speak to them … ‘Don’t be bystanders. If injustice happens to any human being, speak out,’” Henry said. “We like to leave a legacy with the children of what could be and what we lived through so they won’t live through that.”

That’s a sentiment I think we can all agree to remember.

The Hall of Remembrance at the United States Holocaust Memorial Museum in Washington, D.C. DoD photo by Marvin Lynchard