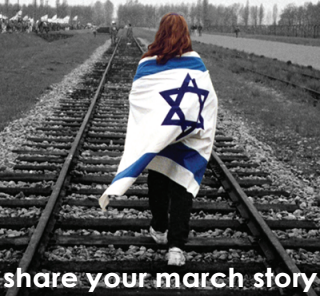 What is the name of the March of the Living Delegation / Group that you traveled with? Broward

What was the most memorable moment of your experience? The thing that got to me was back in Majdanek when we saw the blue remnants of the Zyklon B on the ceiling of the gas chamber

What impact did Poland have on you? Poland was a relatively nice country aside from the rain and the purpose of the trip. I have never been to Europe before and that was my first time in Europe. As a Jew of Russian blood, and non Jewish German blood, it was interesting to see both collide nonetheless.

What impact did Israel have on you? Before the trip Israel was not on my top 10 places to go, but after we went to Israel I have much more respect for Israel. I am planning on in the future opening a classy restaurant in Tel Aviv

How were you impacted by the overall experience? The March really changed the way I look at Israel now, and even my global outlook.

What else would you like to share about your experience? As the only Junior on the 2015 March and from a much different school than everybody else there; I was very shy and antisocial at first, but throughout the March I was slowly and steadily talking to people, and by the end of the trip I was the crazy photo bomber and social guy.