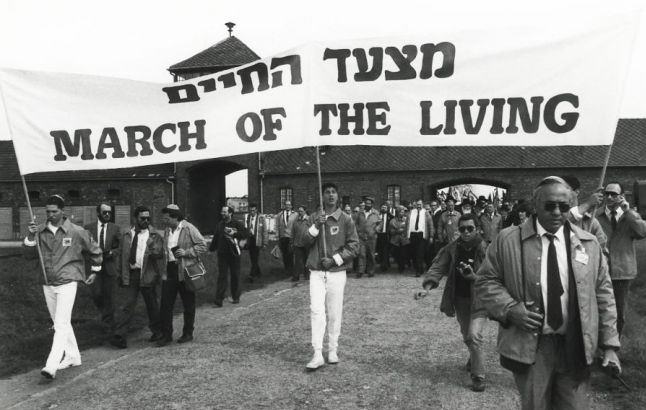 “Recognize”. A word so powerful, yet so simple. Today, we recognize the anniversary of the United Nations decision to recognize Israel. In 1990 I recognized the idea that Israel is the place that I want to continue my life and carry on the roots of our heritage. In 1990, I participated in the March of the Living representing part of the Cincinnati, Ohio delegation. After seeing and experiencing what remains in Poland from the Holocaust, we then traveled to Israel as all marchers do. It was then, in Jerusalem, on Independence Day that I decided to recognize who I am and what I want.

In short, after participating in the 1990 MOTL, I went back to Cincinnati and was not the same person. I knew that I would live in Israel even on the March. On Independence Day, they took us to the lookout overlooking Jerusalem. There was music and singing. I looked at my friend and said, “Someday I will live in Israel. This is my place.” I knew that because after leaving Poland and being in Israel, one can not ignore who he really is. When I got back, I felt something was missing. I was wearing my Jewish star with so much more pride. After graduating high school, I enrolled at Ohio State University. After a year of studying and being in a sorority I still wasn’t ‘back to normal.’ I went to the Shaliach at Ohio State and asked him about different programs in Israel. We decided a volunteer program on a kibbutz for 6 months would be the best option. My parents agreed and off I went, by myself. Another volunteer from Sweden asked me if I wanted to come with her and some other people she met to Yehudiah. I agreed, always looking for adventures. Well, to make a long story short, my husband of today, was on that weekend excursion. After that, I only had a month left on the Kibbutz. I returned to OSU and the phone calls began between Israel and the USA. We wrote letters and decided if it was love (not only for him, but my love for the country that MOTL had given me the opportunity to have) then we have to be together. I wanted to go back. Yet, against all odds, I decided to enroll in an overseas Tel Aviv University program, so that my credits could be transferred back to OSU. I didn’t have money. So, what did I do? I went to the Shaliach at OSU and told them the story. I received a plane ticket. Then I went to Cincinnati and told them the story. I was given the tuition. My boyfriend at the time told me to just get here and everything will be o.k. That is what I did. I studied at Tel Aviv University for six months. When I went back to the US, Hod – my then boyfriend, came with me. We lived together and worked until I finished my BA in Education. I graduated OSU on May 5th, 1995 and made Aliyah on May 25th, 1995. We got married on September 13th, 1995. (Getting married is a whole other story. I am adopted by a Jewish family, and in order to get married I had to prove and stand before the Rabbis in the Supreme Court that I am Jewish- I never gave up because I believed that living in Israel was my place). Today I have five amazing ISRAELI children, one of which is serving in the IDF!! I am so proud of that. My other child, is in Poland today making a statement that “We are still here and no one is going to get rid of us.” She sent me a picture of her with the Israeli flag standing in Treblinka!! It was the only thing I asked for. That was me in 1990. Thinking about who we are as a nation, as a people. The MOTL is what began a whole new generation to be born here and secure our future. Every step I take in Israel, has a part of history, something that nobody can take away from us.

I hope this will inspire Alumni and Jews everywhere to remember our past, our own personal experiences and remember how important Israel is to our lives and our future existence. Thank you MOTL.

By Francine Makbili, 1990 March of the Living
Hadera, Israel