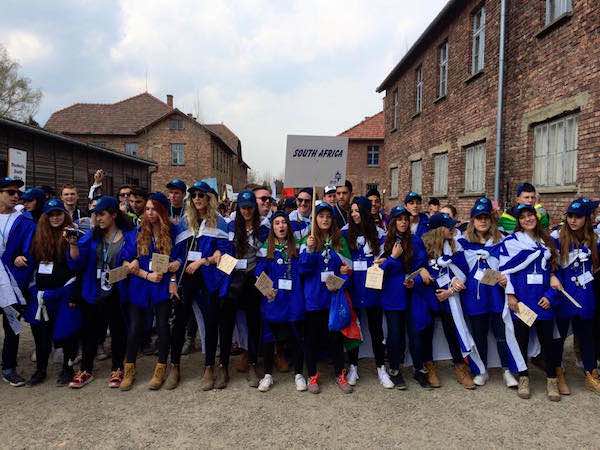 After witnessing the brutality of concentration camps, the sadness of memorials and the vibrant atmosphere of Warsaw, it was time to experience the beauty and history of Kraków on our last day in Poland.

We started off the day with a visit to the Zbylitowdja Gora, a mass grave where 10 000 Jews and Poles were murdered. There were 3 graves for Jews and 3 graves for Poles. A flurry of emotion rushed through the group as we contemplated the brutality of the Nazi soldiers. There were small flowers growing from the grave and this made me think: ‘How can such beautiful and fresh life grow from such a sad place that commemorates a devastating event?’. However I realised that this memorial is not about the life that has been lost, but rather about the fresh, new life that comes to remember it and brings hope for the future.

We travelled to what was once the Jewish quarter of Kraków. We toured through the former ghetto and two shuls, the Beit Hakaneset Harama and the Temple Synagogue. We learned about the story of brave inhabitants of the Kraków ghetto that ran an underground rebellion that put their lives at major risk just so that they could get a meager three lines written about them in the history books. Looking back at their efforts, they definitely achieved their goal.

We then walked to the Galicia Museum for an informative tour about the history of Jews in Galicia and how Galicia was affected before during and after World War 2. To end off our activities for the day we had a discussion with Polish students and heard their perspective on the Holocaust. It was interesting to hear how they approach and think about the atrocities of the Holocaust as European, non-Jewish students that are our age.

We arrived at the airport and lifted our spirits as we departed for Israel, the Jewish homeland.

This brought the Poland leg of the trip to an end. This was a life changing week for the group as along the way we cried, we laughed, we commemorated, we celebrated, we reflected but most importantly we remembered.

– Written by Callan Kotzen, March of the Living South Africa, 2017