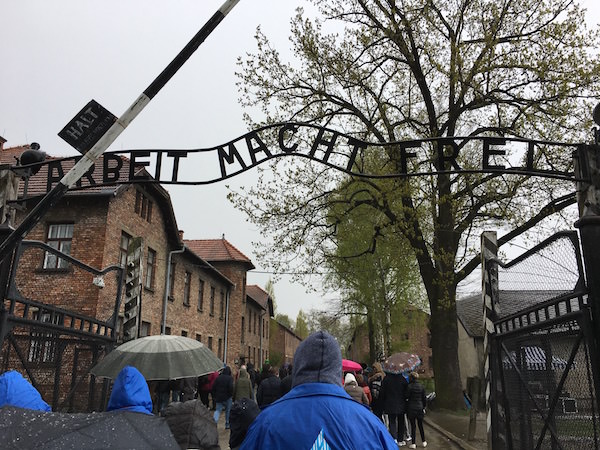 For two weeks, I alongside several other Beverly students took part in the 2017 March of the Living program (MOTL) with the Los Angeles Delegation.

The trip was a total of two weeks. In the first week, as a group, we traveled to Warsaw, Krakow and Lublin, visiting numerous concentration camps, synagogues and other memorial sites. In the second week, we traveled throughout Israel visiting the Dead Sea, the Western Wall and the Tel Aviv port, among other things.

Throughout the various sites we visited, we were often read testimonies from survivors, guards or anyone involved in what happened.

When our group was visiting Birkenau, one of the letters read to us by a German construction company was troubling. It was a letter by a man debating on the dimensions of the gas chamber to maximize the number of people that could fit inside. The man who wrote the letter was a normal person; he was not an idealistic extremist, but only a normal person who made the conscious decision to aid in the murder of thousands of people.

“I have known since spring 1943 that innocent human beings were being liquidated in Auschwitz gas chambers and that their corpses were subsequently incinerated in the crematoriums,” Herman Lambert, a construction company owner said in 1946.

Of all the testimonies that were read, speeches heard and sites seen, what gave me the most pause was the immense planning that went into organizing this genocide.

Aside from Auschwitz, I also had the opportunity to visit Majdanek, the only concentration camp that was left fully intact after the war because it was overrun so quickly. It was the last camp we visited before we left for Israel and the most impactful due to the fact that it’s the only camp in which the gas chambers and crematorium are in their original form.

The main event of this trip, however, was on Yom Hashoah, Holocaust Remembrance Day, where thousands of people gathered to March from Auschwitz to Birkenau followed by a ceremony at Birkenau with various speakers. Among those speakers was Elie Wiesel’s son, Elisha Wiesel, the Israeli Minister of Education and Holocaust survivor Edward Mosberg.

A common theme rang throughout all of their speeches: that never again will there be another Holocaust.

Sadly, however, that is just not true. In Cambodia, Rwanda, Darfur, Bosnia and most recently Iraq, people belonging to a specific ethnic group have been targeted and exterminated for no reason other than their ethnic group or religion.

I have seen firsthand what a human being can do to another human being. In just one day, the Nazi’s slaughtered 10,000 people, nearly double the number of people present at the ceremony.

Do not be so naive to think that something like the Holocaust cannot happen again, because it can, and in some form has already occurred.

The world cannot afford for us to remain as bystanders. The US knew about the extermination happening at Auschwitz but did not act upon that information until later in the war. Today, the world knows about North Korea’s concentration camps, but no one has acted.
How many more people must be slaughtered for the world to act?

If there is one thing that I’ve taken away from this trip it is to never remain a bystander. If there is action to stop someone’s suffering, no matter how grand or small, then it must be taken.
To quote the late Eli Wiesel, “We must take sides. Neutrality helps the oppressor, never the victim. Silence encourages the tormentor, never the tormented.”