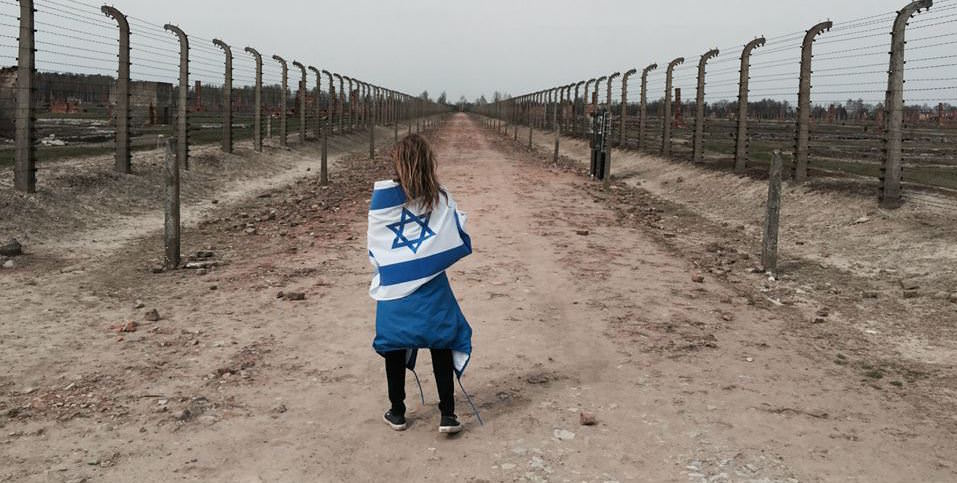 The most transformative moments of my trip were those spent with people who endured the horrors of the Holocaust. The survivors’ passion and drive were unlike those I’ve ever encountered in any other human beings…Without the slightest sign of fatigue, they shared with us deeply personal stories with universal implications about human suffering, perseverance, and heroism.

One moment… left a particularly lasting impression on me, took place at the closing ceremony in Birkenau. Against the backdrop of barbed wire fences and ruins of crematoria, the survivors were getting ready to light the candles for Kaddish. Each stepped forward and read out the names of his or her family members who perished at the hands of the Nazis. One woman approached the microphone but was unable to speak. She stood in front of us and cried. Another survivor came up to her and said, “Wait, don’t cry. Look! Look at them! They are here for you!” She was right. “I looked around me and I realized that with me were hundreds of young people who wanted to learn, who wanted to remember, who wanted to prevent things like this from happening in the future.

I gained hope by listening to them and by sharing with them my own fears and insecurities. I came to realize that this is the only route to hope. We must listen; we must welcome opportunities to become exposed to other cultures and to other peoples; and we must educate each other. Hope can only be realized through mutual understanding.

Only through such an understanding can we promote knowledge and diminish hatred. And then, maybe, just maybe, will we be able to say “never again.”

Those two weeks were ones that were the most life-changing and moving I’ve ever had the privilege to experience. The week in Poland, while it was probably one of the hardest weeks of my life, was extremely meaningful. Being able to see firsthand the horrors that took place some 70 years ago was indescribable.

One event stood out to me in particular. This was something I noticed the first time we were all together saying Kaddish at a mass grave. In Poland, it was generally overcast the entire time if not raining, but as we stood together on that day and said Kaddish, the sun came out. The same thing occurred again a few hours later at Treblinka and again and again throughout the different death camps we went to. The most brilliant example was during the actual March of the Living ceremony as 10,000 of us said Kaddish for those who perished even on the very ground we stood on. It was the most miraculous thing I have ever witnessed. The only explanation in my mind was that God and the 6,000,000 were watching over us and smiling, and that was the source of the light that pierced through the clouds every time we said Kaddish.

I had never been to Israel before the march, and being able to go with my best friends after coming from a place where even today one is stifled for being Jewish, was the greatest feeling I’ve ever had. On the day of the march in Israel, our group along with thousands of other Jews marched to the Kotel while laughing, cheering, and singing. That alone was an incredible feeling. When we got to the Kotel and I was able to go up and put a prayer in the Western Wall and then proceed to pray with thousands of other Jews at one of the holiest places in the world, it made me cry. I had never felt so proud or such an intense love for Judaism than in that moment. Being in Israel definitely lit a spark in me and I plan to fan that flame through immersing myself in Judaism and hopefully returning to Israel as soon as I can.

Cold, the word that comes to my mind now. Feeling the presence of all the people who had left, the belongings of the children, our fingers and toes cramping from the cold, touching the walls that someone had touched before us, the sky with its curtains of darkness, the endless walls, are some of the many images that remain in my mind. Dedicating a time in everyday to sit together reflecting on the day, as well as sharing our feelings and thoughts about what we had experienced, helped create the warmness we could not find in the events that had taken place years ago. I noticed at many moments of the time we spent that I was unable to speak; I felt my soul cry to see the amount of harm the human race is capable of doing to each other. I learnt that the importance of the march is not only to give moments of silence to the souls that had gone, but also to remember what had happened in order for it not to repeat itself, and we must learn from the past. To me, being there meant that we could all stand together, regardless of our origin, because we are all the same flesh and blood; that our differences must make us more knowledgeable, understanding and connected, because in the end we are inflicting suffering on our own family. We are all the same world, and the beauty of this world lies in its diversity.

The trip turned out to be as much thought provoking as it was emotionally draining. I came face-to-face with the utter fragility and the extraordinary resilience of the human being. I experienced the ease with which human beings are able to demonize and dehumanize other human beings… and then… after going through such horrid and hideous experiences… I witnessed the victims’ ability to not only continue to exist… but also to create dynamic communities.

I think the trip to Poland… with the March of Remembrance and Hope… forced us all to transcend our religious…political… and cultural boundaries in order to bear witness to the common humanity we all share… the common humanity that speaks in the language of life and death… hope and despair… joy and pain… acceptance and alienation. These are emotions and experiences that we all feel… despite the different colors of our skins… the countries of our birth… and the names of our ancestors. This common humanity is what should unite us when injustice is inflicted upon any one of us… on the basis of these differences. This is not to eradicate the differences… but to transcend them when there is a need to embrace a higher ideal.