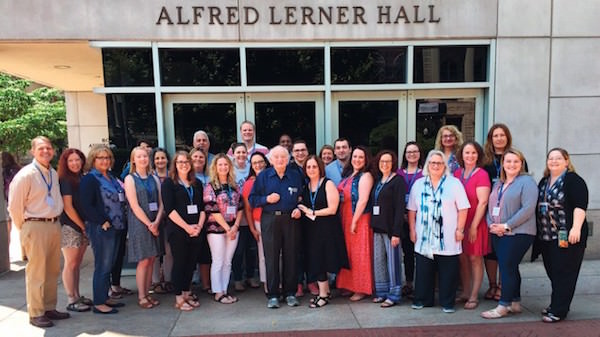 In this photo of this year’s Lerner Fellows, Heather Lutz is the sixth from left in the front row, in white jeans and black patterned top. Roman Kent, president of Jewish Foundation for the Righteous, and Stanlee Stahl, executive vice president of JFR, are in the middle.

Jewish Standard – One of many anti-Jewish laws the Nazi regime enacted between 1933 and 1945 prohibited Jews from owning dogs, cats, and birds. So what were German Jewish families to do with their beloved pets?

There’s even a book about this lesser-known racist law and its effect on a family: “My Dog Lala: The Touching True Story of a Young Boy and His Dog During the Holocaust,” by Roman Kent.

This summer, Ms. Lutz, who lives in Ringwood, heard the story firsthand from Mr. Kent during an intensive five-day course sponsored by the Jewish Foundation for the Righteous for 22 select middle- and high-school teachers from 10 states, Croatia, and Poland, as well as three educators from Holocaust centers or museums.

A granddaughter of Polish Holocaust survivors, Ms. Lutz said she would “cherish forever” the opportunity to meet Mr. Kent, as well as other noted survivors and scholars, including Alexandra Zapruder, author of “Salvaged Pages: Young Writers’ Diaries of the Holocaust.”

“I’ve taught ‘Salvaged Pages’ in the past, but meeting Alexandra Zapruder will inspire me to use more of the text and dive deeply into it in different ways,” Ms. Lutz said.

Held at Columbia University from June 25 to 29, the JFR Summer Institute included time for participants to gather in small groups to process what they learned from the lectures, share teaching concepts, and develop approaches to introducing the subject matter to their students.

Another lecturer was Edward Westermann, a history professor at Texas A&M University and a fellow at the U.S. Holocaust Memorial Museum.

“He spoke to us on collaborators and their methods,” Ms. Lutz said. “I teach about that but he had photos and other scholarly material I will certainly introduce in the classroom. Each lecture added a dimension to my knowledge.

“As I redesign my curriculum for next year, I will be thinking of ways in which I can bring it into the classroom.”

Ms. Lutz has been teaching English for 15 years. Four years ago, with the full support of the high school’s administration, she designed and implemented a one-semester Holocaust literature elective for juniors and seniors. Since 1994, Holocaust and genocide education has been mandated in New Jersey for grades K-12. Each school may design its own curriculum.

The Holocaust literature class became so popular that it grew into a full-year course that Pascack Hills students can take as an elective or as their English class for junior or senior year. Ms. Lutz had 100 students last year; about 40 of them were Jewish.

“I find it really interesting to see the ways in which non-Jewish students who have not learned a lot about the Holocaust respond to the class,” Ms. Lutz said. “Some of those students become inspired to major in genocide and Holocaust studies in college, and that’s the greatest gift an educator can get.

“I can’t say enough about our principal, Glenn DeMarrais, and the upper administration who not only supported me when I went on the March of the Living but allow me to bring in Holocaust survivors to speak and to take my classes on field trips. I always try to connect students with the subject matter outside the walls of the classroom. This year we went to the Holocaust Resource Center at Kean University.”

That resource center is one of the partners in the JFR’s Centers of Excellence program, through which Summer Institute participants are nominated.

The New York–based JFR’s mission is twofold: to support aged and needy Holocaust rescuers — “Righteous Gentiles” — in 20 countries and to preserve their legacy by sharing their stories and educating others about the Holocaust. The Summer Institute is one of several programs geared to the second part of the mission.

The foundation’s executive vice president, Stanlee Stahl, said that the Summer Institute provides teachers with graduate-level courses on the Holocaust, pedagogical connections with other teachers and their curriculum so they learn what’s worked and what hasn’t, and resources for the classroom.

“Every year they try to reunite a survivor and rescuer, which is becoming more difficult as the years go by,” Ms. Lutz said. “There are 15-minute clips online that show these reunions, and that is a perfect length for use in the classroom. The reunions are really personal and help students understand that these were people just like us.”

Today, when few survivors and rescuers are still alive to tell their stories, “institutes such as the JFR are so important in helping us make that personal connection,” she continued. “When we approach the Holocaust as a story of people — whether victims, collaborators, bystanders, or perpetrators — it will always be relevant.

“I’ve strived to have students think not only about Auschwitz and corpses but to look at rescuers and find lessons of moral courage. One message that comes up a lot is to encourage our students not to be indifferent when they see moral injustice. That’s something that I try to instill in the classroom, because the moral lessons of the Holocaust are extraordinarily timely.”

Ms. Lutz said she has felt “truly humbled and proud” to see students’ level of interest in learning about the Holocaust and the impact it has on their lives. “I have students who will openly admit they never loved English class and then on their own they go and read multiple memoirs about the Holocaust. I don’t know exactly why or how but they are responding more passionately and genuinely to stories of the Holocaust.”

She exposes her students to a wide variety of source material. “I think an interdisciplinary approach is the most effective way to teach Holocaust studies — so I bring in primary sources including artwork, poetry, nonfiction, fiction, and documentaries. This provides a fuller picture.”

Ms. Lutz said that she and her cohort of colleagues from the Summer Institute will continue to collaborate and meet.

All 22 participants are called Alfred Lerner Fellows in homage to the late JFR adviser and donor Alfred Lerner, for whom a building on Columbia University’s campus is named. This summer, the American fellows included teachers from Washington State, Florida, Texas, Maryland, Alabama, Alaska, Missouri, South Carolina, Ohio, and New Jersey. Ms. Lutz was the only one from Bergen County.

“This has really put an exclamation point on my life both professionally and personally,” she said about the Summer Institute.