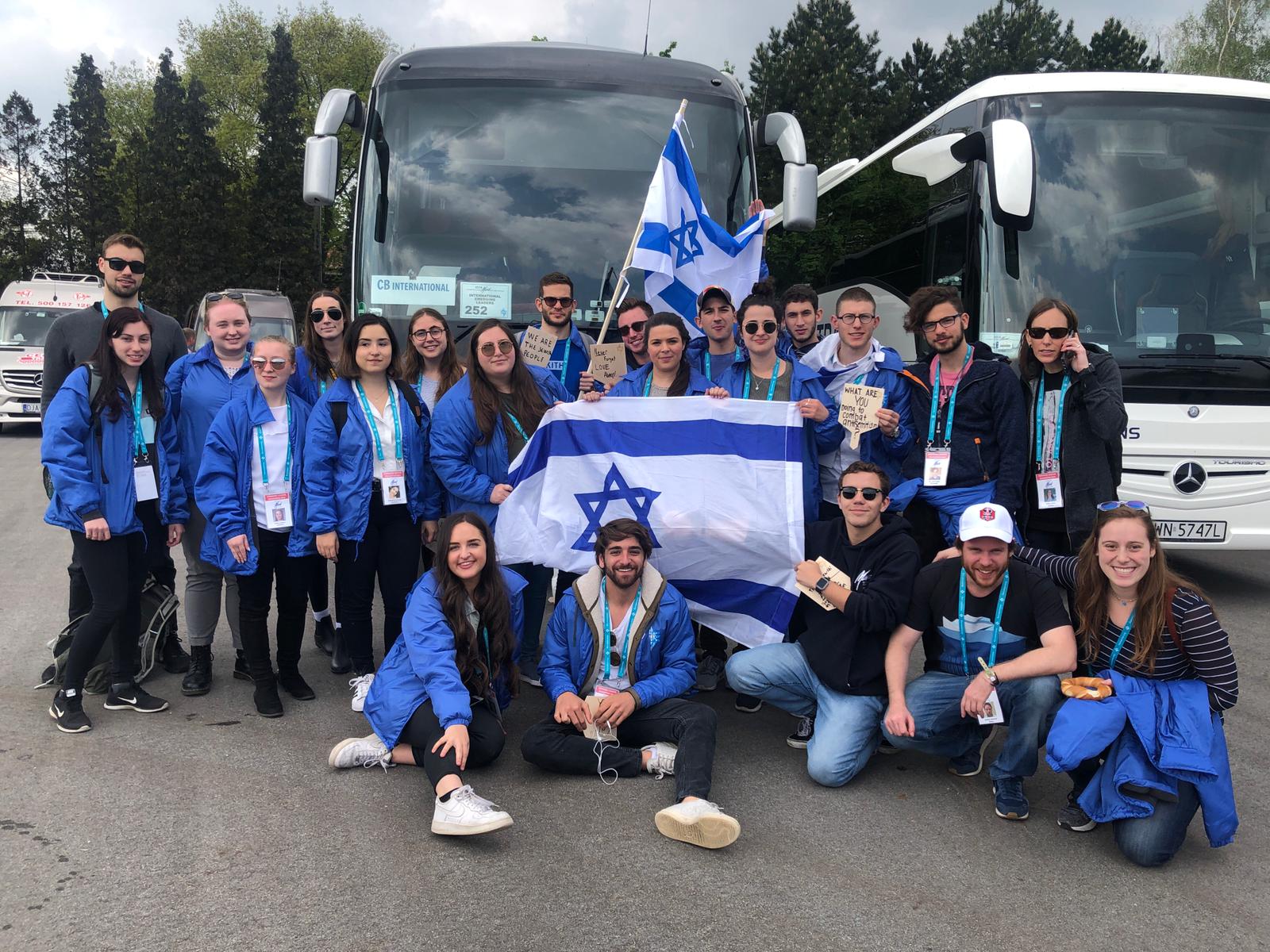 Four years ago, in April of 2015, just a month before I was to graduate from high school, I participated on the March of the Living. Upon arriving in Warsaw, the naïve excitement of teenage social interaction and two weeks off of school soon morphed into a somber, gradual realization of the vastly different world and time we had been transported to. A memorial monument at Chełmno, a pit of ashes in Majdanek, and the desolate fields that were once Treblinka. This was not suburban South Florida.

After bus rides through the Polish landscape, hearing the testimony of the survivors on our Broward County delegation, and saying Kaddish so often it felt like a mantra, I found myself on Yom HaShoah, Holocaust Remembrance Day, with nine thousand others Jews from around the world, marching out of the gates of Auschwitz towards Auschwitz II-Birkenau. 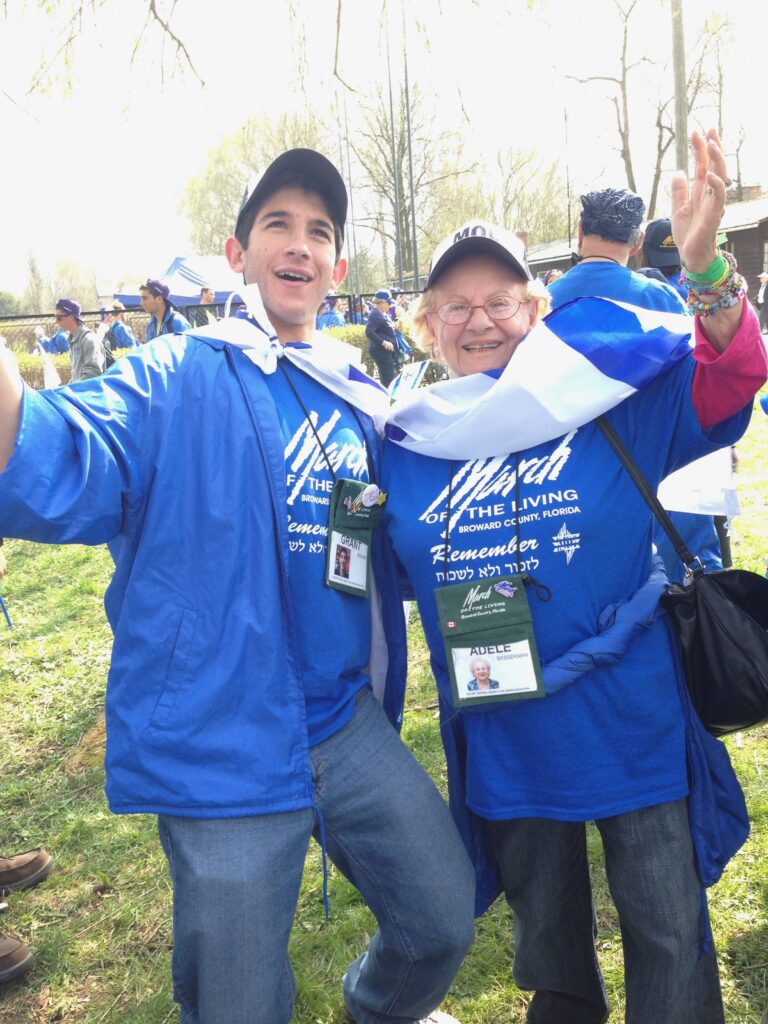 A sea of blue jackets and Israeli flags. The juxtaposition who we are, Jewish teenagers, educators, and survivors, energetic, hopeful, and very much alive, with where we are, the post-modern, industrial culmination and manifestation of centuries of Jewish hatred and persecution. I hold this disparity as I walk alongside an endless sprawl of small wooden posts adorned Sharpie drawn messages of remembrance and love. “How beautiful,” I marvel to myself, simultaneously feeling as though they were unnamed tombstones scattered across this blood-drenched ground.

We enter Birkenau and walk along the train tracks towards a large stage where the ceremony is about to begin. It seems to take an eternity to get there; my steps, heavier, carrying the gravity of the last few days. The speakers spoke. The audience listened. Though, when I look back on that day now, four years later, I do not remember much of what was said, rather, only of what was sung: The Hatikvah at the conclusion of the ceremony.

I stood in the audience, looking up at the stage, my mouth, shut, as a chorus of voices began to chant.

Time stopped and everything was still. A tsunami of emotion rolled over me. How was it that humans were capable of treating each other in such a way?

I looked around me.

A gas chamber to my left.

Barbed wire, off in the distance to my right.

I stop and spot my survivors and think about their innocence and families lost.

Tears flow from my eyes.

I turn back, looking up towards the stage…and I began to sing.

After I left Poland, I vowed never to return. Yet, four years after that fateful morning in 2015, this past April, I was back on a flight to Warsaw. “Why?” you may ask.

Great question. To start, my March of the Living trip at the end of high school had profoundly impacted the way I viewed my Judaism, the importance of keeping this tradition alive, as well as my responsibility to fight for justice, to speak out against bigotry and make a positive impact on this world. Yet, after returning home, life went on. I graduated high school and started college. I fell in love and had my heart broken. I was so preoccupied trying figure out who I was and what I wanted to do, that I had not taken the time to consider how I might incorporate my March of the Living experience into that greater equation.

Things changed this past October when a gunman entered the Tree of Life synagogue in Pittsburgh and took the lives of 11 innocent American Jews. All of a sudden, my March of the Living experience was thrust back into the forefront of my consciousness and I felt called to take action. After grieving with and feeling incredibly supported by my community at Duke University, I wrote an open letter to my younger brother in my school paper about our Jewish-American identity and the importance of choosing love over indifference. I organized a mural painting in commemoration of the victims and I helped lead a town hall discussion about anti-Semitism when a Swastika was drawn on that very same mural several days later. Thus, when the opportunity presented itself to return to Poland and participate on the inaugural Emerging Leaders Conference on Combatting Antisemitism, Racism, and Intolerance, I didn’t hesitate to apply. 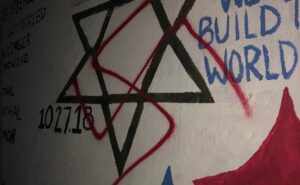 It was a Sunday morning at the end of April and I submitted my final essay as an undergraduate student before boarding my El Al flight to Warsaw. So, as you can imagine, it was a bit strange that just as I had formally finished college, I ran into the entire Broward County delegation in the ticketing line. Four years later and I was back exactly where I had started, with a group of high schoolers from suburban South Florida about to cross an ocean on the wings of an El Al charter flight. Later, standing in the international terminal, chatting with Adele Besserman and Irene Zisblatt, the two survivors who had also accompanied our trip in 2015 and whose stories and strength had moved me beyond words years ago, I felt an immense sense of déjà vu and also a profound feeling that I was exactly where I was supposed to be.

In its inaugural year, The Emerging Leaders Conference, an initiative of the International March of the Living, brought together a delegation of 20 students and young-professionals, each having had participated in the March, to discuss rising antisemitism in their own communities and to draft an International Declaration against Antisemitism, Racism, and Intolerance to be read during the closing ceremony of the 31st annual March of the Living. Upon arriving in Kraków and convening with an opening circle in a hotel conference room, it was clear to me just how powerful this second March of the Living experience would be.

Here we were, a group of twenty individuals, age and experience ranging from a recent Argentinian high school graduate and social activist to a British young professional working with the UK Labor Party and everything in-between, from 10 countries from every corner of the globe, feeling so compelled by a trip to Poland they had taken (as long as 10 years’ prior for some in our contingent), to stop their respective lives and spend a few days discussing and brainstorming ways to combat hatred and intolerance in the world today. These were not strangers, for each had been so moved by his or her March of the Living experience to be there again now, called upon to be a leader in the fight against antisemitism. Many of the delegates had committed their professional careers to this work. Others had taken small but impactful measures in their own communities and campuses. Regardless of where we had come from and what we had done up to that point, we were together now, sitting in a circle in a hotel conference room, sharing how antisemitism had affected our own lives and drawing inspiration and strength from how each had responded to combat it. 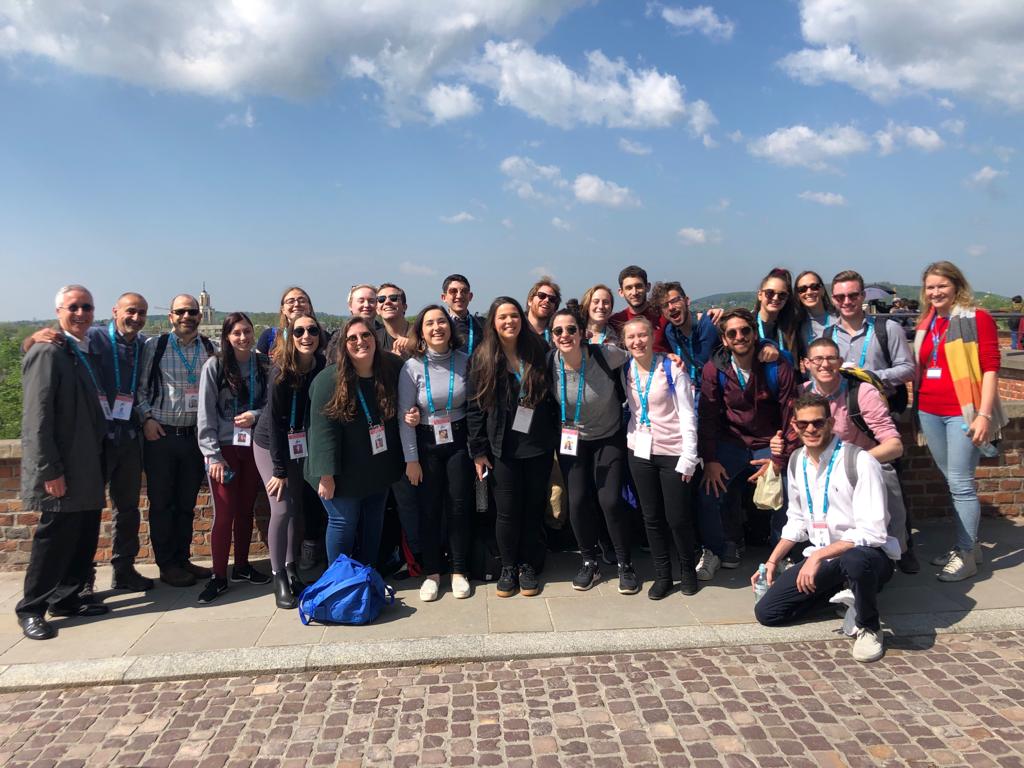 The next few days were a fantastic blur. We visited sights in Poland and learned about Jewish-Polish relations over the past 1000 years, seeing a more nuanced narrative of the country which was previously just that of the camp and ghetto. We participated in workshops with current March of the Living participants at Jagiellonian University and on a panel discussion about the state of antisemitism in the world today. We stayed up late into the night drafting and revising our declaration against antisemitism, hatred, and intolerance. Throughout it all, on long bus rides, on hurried walks, and during meals, incredible conversations ensued. About Judaism. About Responsibility. About Leadership. About our lives, our stories, our futures. By the time we had arrived at Auschwitz for the March of the Living on the final day of the conference, we had already become a family, a community of future Jewish leaders.

A sea of blue jackets and Israeli flags. “Am I really back here,” I wonder aloud to myself.

Despite the familiarity of the setting and structure of the day itself, the context and head space in which one embarks on the March of the Living truly does change the way in which one experiences it. Four years prior, I had spent the days leading up to the March bearing witness to extermination camp after extermination camp, emotionally overwhelmed with grief and despair, thus, I was focused on the tragedy of our collective past. Barbed wire. Gas chambers. Train tracks. I saw them all. 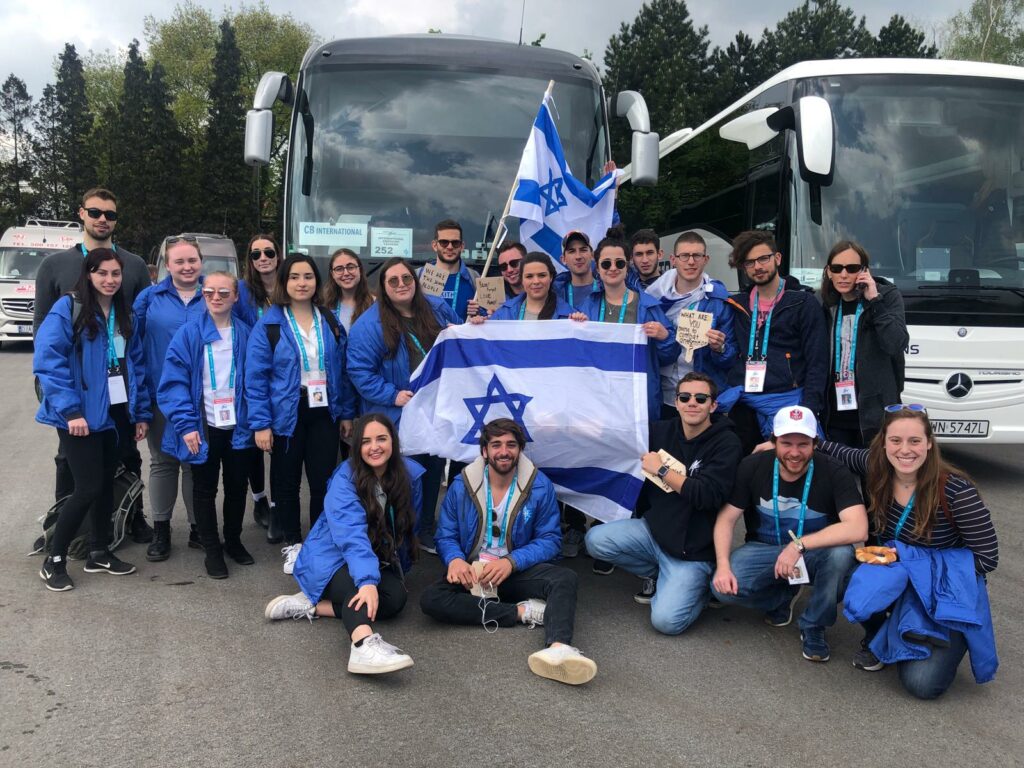 This time around, I had spent the three days leading up to the March with inspiring, thoughtful, passionate young Jewish leaders, learning about a rich Polish history, conversing about the persistent scourge of anti-Semitism today, and reaffirming our resolve to take a stand against it. Thus, despite the tragedy of our past, I was now focused on the promise of our collective future. Compassion. Bravery. Leadership. I saw them all.

We walk out from the gates of Auschwitz on the road towards Auschwitz II-Birkenau. The road is longer than I remembered it to be. I retrace my steps.

Soon, at the ceremony, we sit in the back of the VIP section, staring up at the stage. The speakers spoke. The audience listened. And, as the conclusion drew near, Michael Soberman and Sarah Atkins, the directors of the Emerging Leaders program, ushered us towards the stage.

We shuffled up the steps as Greg Masel, Master of Ceremonies, introduces our group. We line up, single file, and come to a halt. Noah from South Africa steps forward and begins to read our Declaration, the product of countless conversations about what it means to be Jewish and about the responsibility we share to repair the world:

After the applause dies down, we start towards the stairs.

“Please remain on the stage,” Mr. Masel requests, as he begins to introduce the Cantor of the IDF who will be singing the Hatikvah.

I was taken aback. I remembered how I had been affected by the singing of Hatikvah on the previous March, and I became immediately overwhelmed thinking that now we were to be on the stage as it was sung. The cantor and a chorus of voices began to chant. 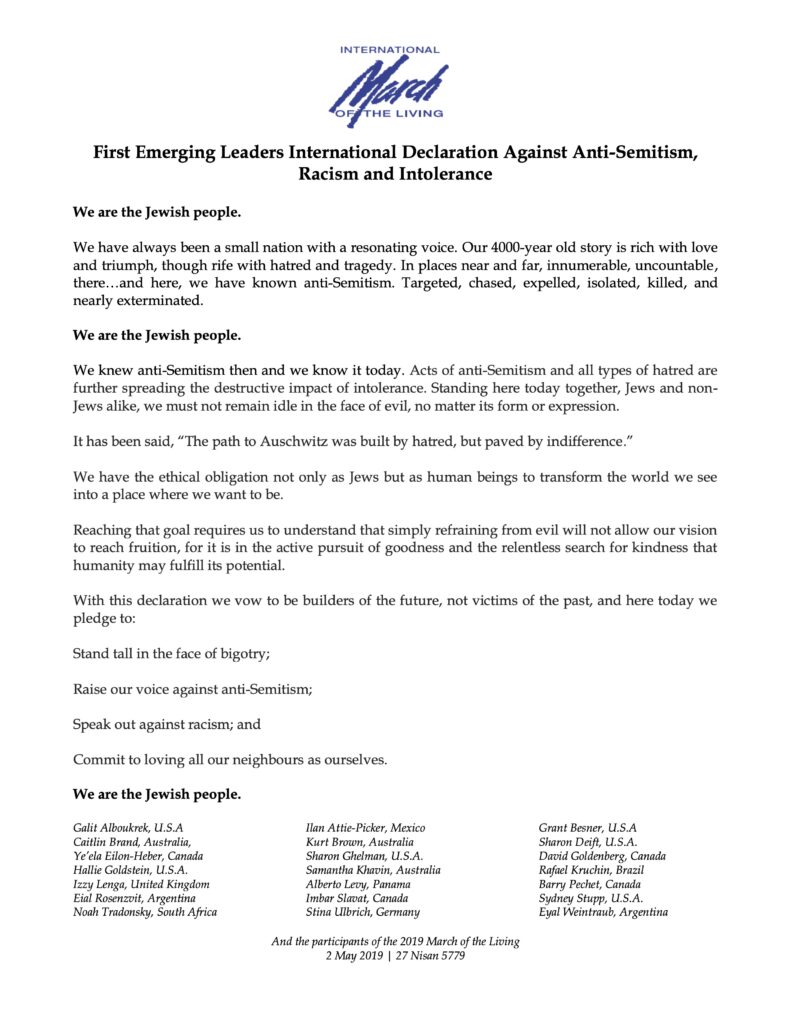 Time stopped and everything was still.

I looked around me.

Jewish stars. Thousands united in a song of hope.

I stop and stare at a boy in the crowd. He’s looking around, at the camp, at his past. He turns towards the stage. We lock eyes.

I look down at the boy who is looking up at me, and then out over the crowd, out towards all of those thousands of faces now staring back. I continue my gaze upwards, up over the train tracks, up past the gates of the camp, up through of the forests of the Polish countryside.

I wipe the tears from my eyes with my hand and turn back towards the boy.

The boy is standing in my shoes and he’s wearing my blue and white Jewish star cardigan. He’s no longer in the crowd looking up at, he’s up on the stage and looking out over. A call to leadership, empathy, and action.

We open our mouths and begin to sing. 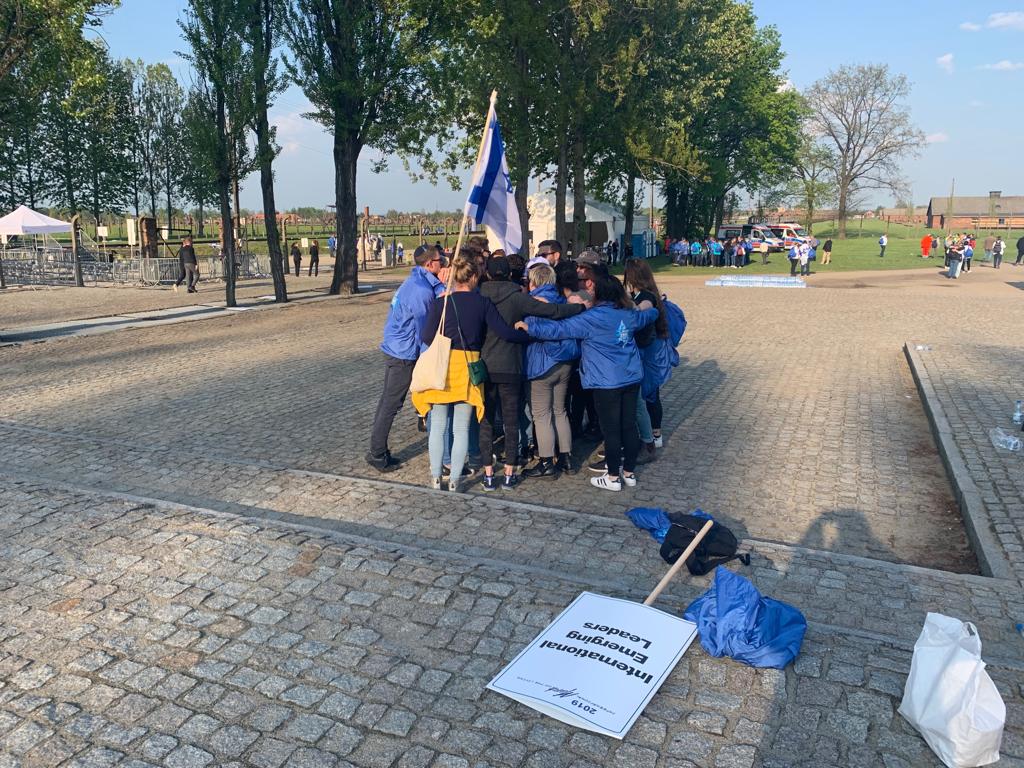 Written by Grant Besner, March of the Living Youth 2015 and Emerging Leaders 2019