Dec 19th in Jerusalem, Israel: Prosecuting Evil: A Conversation on History and Justice with Gabriel Bach

For those unable to attend, the event will be streamed live HERE. 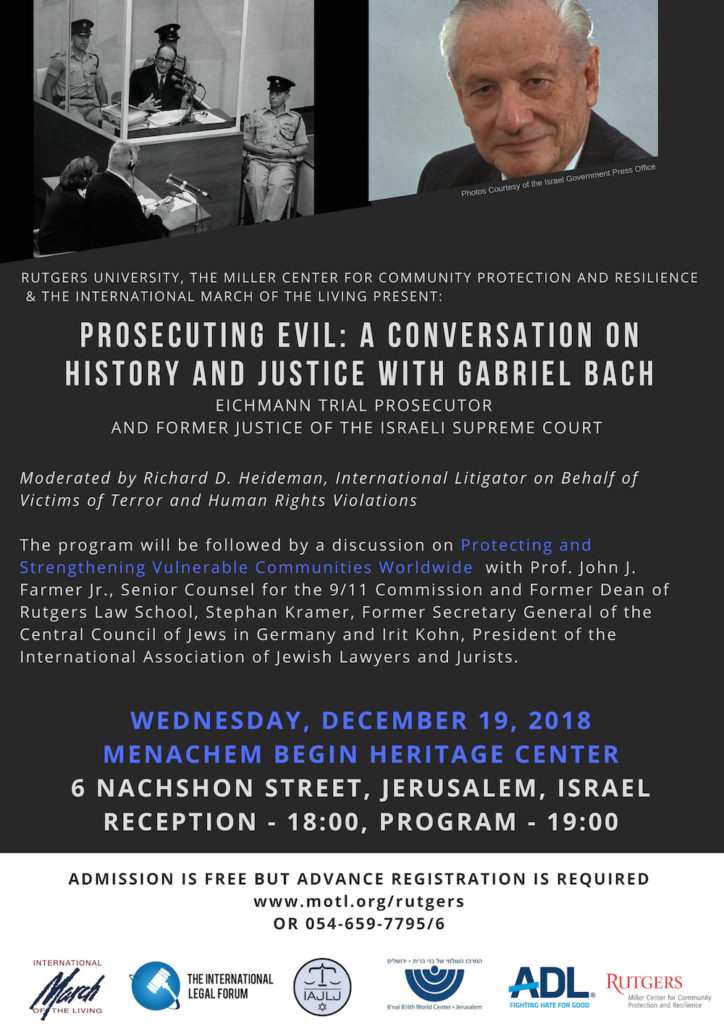 In 1961, the Eichmann trial served as the most public and prestigious search for a measure of justice following the unprecedented scope of evil that defined the Holocaust.

Even decades later, that trial, and the events that preceded it, continue to transfix our society and remind the world that justice must always be sought out even at great cost and effort – for that is what we owe to the victims of Nazism, their families and indeed a world that promotes freedom and human rights. The trial served as one of the first major events giving the Holocaust survivor community a voice and sense of collective purpose that remains a source of inspiration until today.

On December 19, 2018, a program presented by the Rutgers University Miller Center for Community Protection and Resilience together with The International March of the Living will offer the chance to hear from one of the key remaining figures behind that dramatic trial and better appreciate the process of prosecuting one of the worst criminals in history and what it meant for Israeli society – and the system of justice in a modern democracy.

The program will take place at the Menachem Begin Heritage Center in Jerusalem. It will begin at 6:00 PM with a reception including light refreshments followed by the presentations beginning at 7:00 PM. Admission is FREE but advance registration IS REQUIRED as space is limited and pre-assigned. To receive your tickets, register HERE or call 011-972-54-659-7795/6 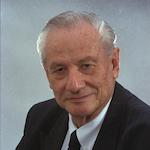 Justice Gabriel Bach, born in Germany and fled with his family to Holland and later Palestine. He served as Deputy Prosecutor in the Eichmann trial before becoming Israel’s State Attorney and later a Justice on the Supreme Court. He has written and spoken extensively about his experiences providing a critical voice and perspective on these events which defined Israel in the post- Holocaust period. 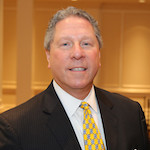 The event will be moderated by Richard D. Heideman. Mr. Heideman is a highly-regarded and sought-after attorney whose activities have been instrumental in bringing justice on behalf of victims of terrorism through numerous suits against national backers of heinous acts perpetrated against civilians. A veteran activist on behalf of the global Jewish community and the State of Israel, he currently serves as the President of the American Zionist Movement. 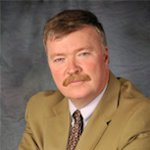 The program will also feature a discussion with Professor John J. Farmer, Jr. and Stephan Kramer on protecting and strengthening vulnerable communities across the world in the face of growing anti-Semitism and extremist violence. Professor Farmer is former Attorney General for the State of New Jersey and senior counsel for the 9/11 Commission as well as serving as an assistant U.S. Attorney. He is the former Dean of Rutgers Law School. Stephan Kramer is the President of the Office for the Protection of the Constitution of Thuringia, Germany. From 2004-2014, Kramer served as the Secretary General of the Central Council of Jews in Germany and head of the Berlin office of the European Jewish Congress.

The International March of the Living is an annual educational program, bringing individuals from around the world to Poland and Israel to study the history of the Holocaust and to examine the roots of prejudice, intolerance and hatred.

The Miller Center for Community Protection and Resilience of Rutgers University focuses on identifying and working to protect vulnerable communities in Europe and the United States. The Center provides educational and practical resources designed to empower these communities to address and confront specific acts of hatred and intolerance, specifically in the face of growing extremism around the world. 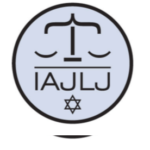 The International Association of Jewish Lawyers and Jurists strives to advance human rights everywhere, including the prevention of war crimes, the punishment of war criminals, the prohibition of weapons of mass destruction, and international co-operation based on the rule of law and the fair implementation of international covenants and conventions.

The B’nai B’rith World Center in Jerusalem is the hub of B’nai B’rith International activities in Israel. The Center serves as the key link between Israel and B’nai B’rith members and supporters around the world.

Register for Event: Dec 19th in Jerusalem, Israel: Prosecuting Evil: A Conversation on History and Justice with Gabriel Bach