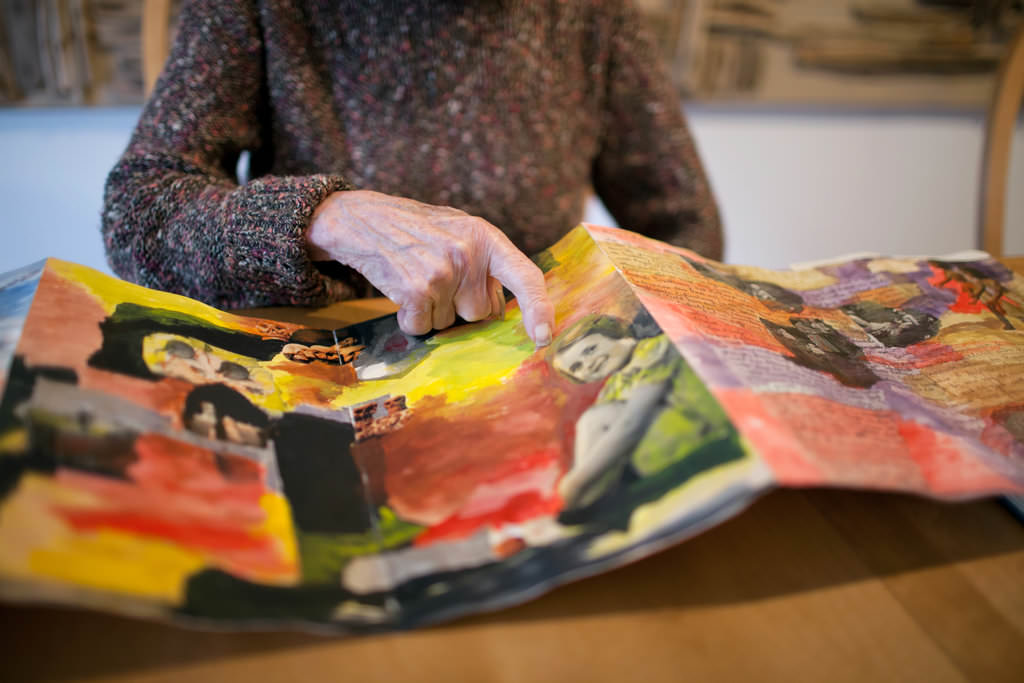 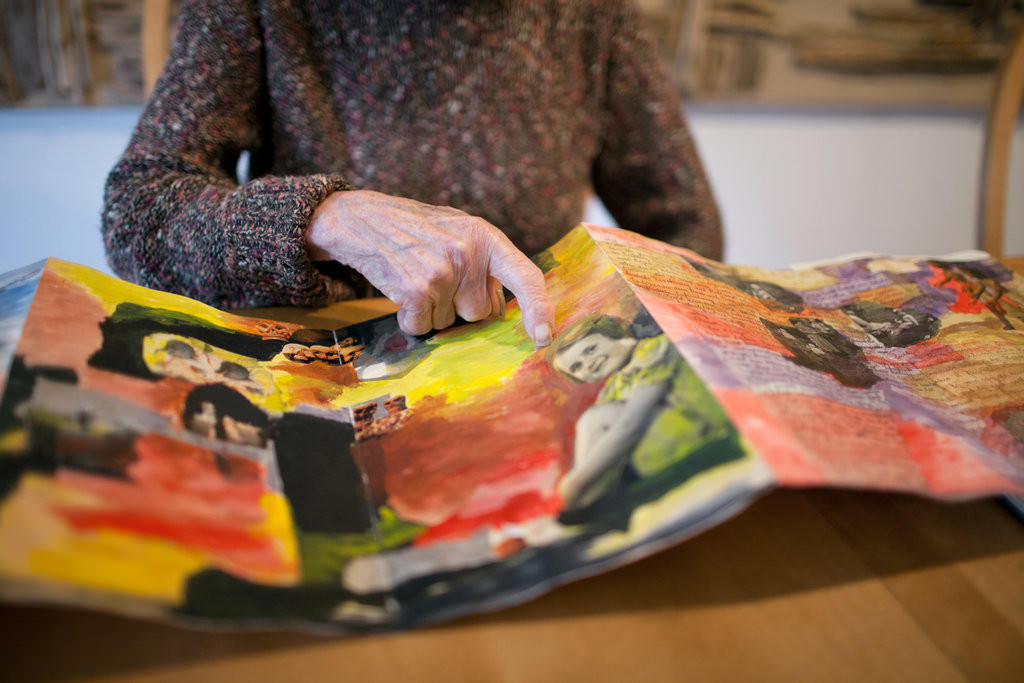 The collage artist Ruth Jacobsen, 83, and the handbag designer Judith Leiber, 95, both Holocaust survivors, have relied on the creative process and a strong-willed entrepreneurial spirit to reclaim their lives and break glass ceilings for women in the United States.

For decades, Ms. Jacobsen kept a family photo album unopened in her closet. A neighbor and member of the Dutch resistance had risked his life to creep back into her Nazi-occupied house in Oud-Zuilen, the Netherlands, to save it. He later presented the album to her as a surprise gift after the war.

In the United States, she became a textile artist, and her art focused on the oppressed and voiceless, without referring to her own history. 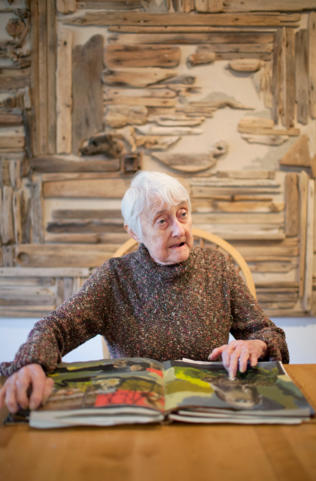 “I was afraid to remember everything that took place, ” Ms. Jacobsen said in a recent interview at her house in Southampton, N.Y. At age 60, she finally opened the album. Painful memories flooded back and, to resolve her trauma, she began tearing the photos in the album to create collages.

“People were horrified that she’d ripped the pictures,” her wife and partner of 31 years, Christine Epifania, said, “but she was telling the history in a different way.”

Each morning, she rooted through long-repressed memories of the blue-eyed child whose survival depended on going unnoticed as families harbored her throughout Holland. She created collages depicting the deaths of fellow Jews: her grandmother, who died in Auschwitz, and her parents, who committed suicide after the war, traumatized by their experiences. She also made fantastical collages of a childhood she wished she had had.

“This is my favorite,” said Ms. Jacobsen, her voice almost a girl’s whisper as she pointed to a collage of herself as a toddler holding a teddy bear and riding an imaginary ostrich. The ostrich was carrying her away from it all.

To lift her mood, she would create things of beauty — large works of natural wood construction, laced with reptile skins and strewn with beach-walking treasures from around the world. Her first wall-size piece, mostly of driftwood, was glued directly to her kitchen wall in Southampton. She formed later works on canvases. One, called “Beach Reflections,” is on permanent display at the Unitarian Universalist Congregation of the South Fork in Bridgehampton.

Eventually, Ms. Jacobsen was able to speak about her trauma. She told her story, illustrated with collages, in the book “Rescued Images: Memories of a Childhood in Hiding.”

Like Ms. Jacobsen, Ms. Leiber embraced her creativity after the war and became a celebrated handbag designer. She said it was Hitler who turned her into a bag lady.

Always ambitious, she studied in London, aspiring to become a chemist in the cosmetics industry. But when World War II erupted, Ms. Leiber abandoned her dreams to stay with her family in Budapest. There, she apprenticed as a handbag maker, learning every aspect of the trade.

The Nazis occupied the city and her family kept moving in search of safety, first cramming into a one-bedroom apartment with 26 other people, then moving to the city’s Jewish ghetto. Right after the war, her bombed-out apartment was uninhabitable, so she and some 60 other people lived in a basement, rationing food to survive.

To keep her sanity, she designed handbags in her mind.

In 1946, on the ravaged streets of Budapest, she met her future husband, Gerson Leiber, an American G.I. and artist, and married him within the year. They headed to New York on a ship the next year.

In the United States, she discovered her talent for making handbags was rare among women.

“Women in America weren’t patternmakers or samplemakers. It was a man’s trade,” Mr. Leiber said. 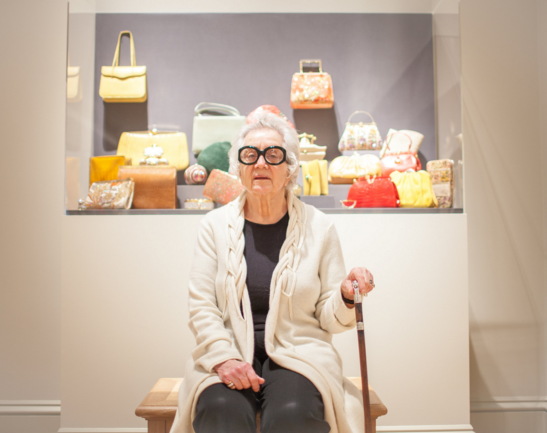 Instead of creating knockoffs, Ms. Leiber could make any type of handbag from scratch. After starting at a factory that mass produced handbags, she went on to work for the fashion designer Nettie Rosenstein for 14 years, eventually overseeing a factory until she and Mr. Leiber started their handbag business in 1963 with four other employees.

They quickly found support from top department stores in Los Angeles and New York, their orders increased rapidly and their business was successful the first year.

Ms. Leiber came up with thousands of sparkling designs, including shapes like penguins and fruit, and frame bags that one reviewer described as clasping as efficiently as “closing the door on an excellent automobile.” Clients included Greta Garbo, Mamie Eisenhower, Barbara Bush and Nancy Reagan. Ms. Leiber became the first woman in her field and the first accessory designer to win a coveted Coty American Fashion Critics’ Award and went on to earn other major awards.

The Leiber Collection, a Palladian-style museum in East Hampton, N.Y., designed by Mr. Leiber, contains about 1,200 of the 3,500 artistic handbags created by his wife. Rhinestones glisten in the shape of dewy tomatoes, delicate embroideries blossom from silks, and fine skins and leathers mimic the work of Mondrian.

“She took inspiration from everything she’s done,” Mr. Leiber said.