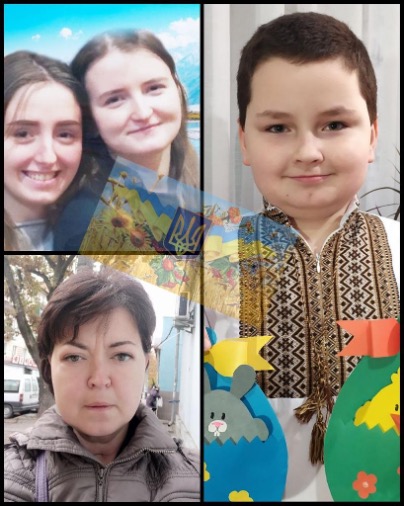 Ukrainian refugees in Poland that will attend March of the Living

Under the shadow of war in Europe, one of the world’s most prominent international Holocaust commemoration events will include refugees from Ukraine, along with delegations from around the world.

“We survived and we are alive. We found shelter and refuge in a sister country. Thanks to wonderful people we will live, we will remember – and never forget.”

Piotr Paweł Borek, Co-Founder of the Shalom Ministry Association: “Oświęcim is now a place of refuge, blessing and saving human lives – unlike what happened at nearby Auschwitz during the Holocaust”

Jerusalem, Israel, April 20, 2022 – A delegation of refugees from the war in Ukraine will participate in this year’s March of the Living to Auschwitz, Poland, on April 28, Israel’s Holocaust Remembrance Day.

After a two-year hiatus due to the Coronavirus pandemic, and against the backdrop of the war in Ukraine, with Poland hosting around three million refugees from the conflict, it was decided that the March of the Living will return this year, in-person, on a limited basis with 2,500 participants from 25 countries including UK, UAE, Israel, USA, Austria, Germany and more. In particular, the March will include a delegation of refugees from the conflict in Ukraine, who will be joining to show their support for preserving the memory of the Holocaust.

Each year, as part of its flagship event, the leading global Holocaust education program, March of The Living, brings thousands of people to Poland, to march the 3.2 km between Auschwitz and Auschwitz-Birkenau in memory of the victims of the Holocaust, as a symbol of the Jewish People’s survival, and to promote awareness and understanding of what can happen when hatred and bigotry are allowed to flourish.

In particular, this year’s March will focus on the fight against antisemitism, and the transfer of the torch of remembrance from the generation of survivors to the next generation, the grandchildren, with only eight Holocaust survivors participating in the March this year – many saying it will be their last.

The delegation of refugees from Ukraine was organized by the Shalom Ministry Association, an organization established by Christians and Jews in the town of Oświęcim near the Auschwitz extermination camp, and by Dr. David Machlis of Adelphi University, who serves as Vice Chairman of International March of The Living. The Shalom Ministry, which has participated in March of the Living for many years, has been working to help refugees from Ukraine since the outbreak of the war.

Piotr Paweł Borek, Co-Founder and leader of the Shalom Ministry Association in Oświęcim, explained, “As the Shalom Ministry Association, we are so privileged and honored to march together, hand-in-hand, to proclaim that we are writing an new chapter in our common history after the Holocaust, especially now in face of the horrible war in Ukraine. We are thankful that we can bring many refugees, including Jews, to come to Oświęcim – turning Oświęcim to a place of refuge, blessing, and saving human lives – unlike what happened at Auschwitz nearby.”

Among the refugees who will participate in this year’s March include:

Dr. David Machlis  said “This year a delegation of Ukrainian refugees, in partnership with the Shalom Ministry, will participate at the March as a tribute to all victims of the Holocaust. The Holocaust has taught the world the price of indifference. To avoid the mistakes of the past, it is our hope and prayer that the symbolism of the presence of these refugees will resonate throughout the civilized world”.