Tibor Rubin Is Dead at 86; Medal of Honor Was Delayed by Anti-Semitism 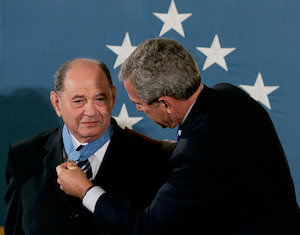 “When Corporal Rubin’s battalion found itself ambushed by thousands of Chinese troops,” the president said at a White House ceremony, “the Americans’ firepower soon dwindled to a single machine gun. The weapon was in an exposed position and three soldiers had already died manning it. That was when Corporal Rubin stepped forward. He fought until his ammunition was gone. He was badly wounded, captured and sent to a P.O.W. camp.” 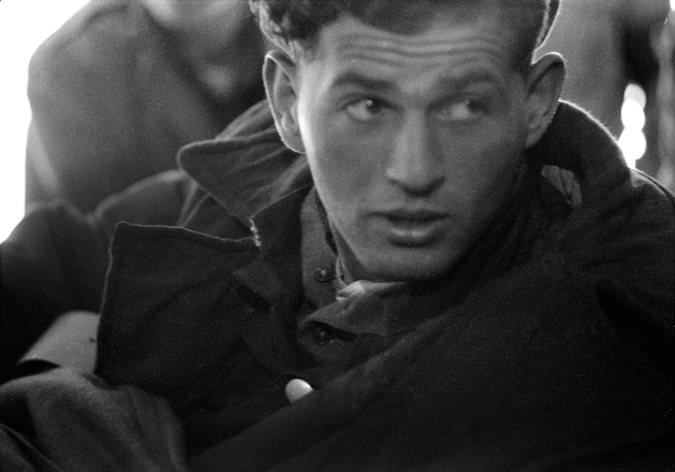 The episode the president — it was George W. Bush — was describing with frank astonishment and admiration took place at Unsan, North Korea, in the fall of 1950. In a long­overdue tribute, he was speaking more than half a century later, on Sept. 23, 2005, as he prepared to present Tibor Rubin, then 76 years old, with the Medal of Honor.

There was much more to Mr. Bush’s encomium that day, but even he did not tell the whole story of the remarkable courage and forbearance of a Hungarian­born American hero, a man who joined the United States Army to thank the nation and the troops that rescued him from the concentration camp where he had been imprisoned as a teenager, and for whom recognition was delayed for decades because he happened to be Jewish.

Corporal Rubin, who was known familiarly as Ted, had lived quietly in Southern California since the end of the Korean War, mostly working in a liquor store owned by his brother Emery. He was 86 when he died on Saturday at his home in Garden Grove, Calif., a nephew, Robert Huntly, said.

The narrative of Corporal Rubin’s life is Hollywood­worthy. He was born on June 18, 1929, in Paszto, a Hungarian shtetl with a reported 120 Jewish families, to Ferenc and Rosa Rubin; his father, who had served in the Hungarian Army during World War I and spent several years as a prisoner of war in Russia, worked in a shoe store. According to “Single Handed,” a 2015 book about Corporal Rubin by Daniel M. Cohen, in the days before the Nazi occupation of Hungary in March 1944, his parents sent him with a band of adult escorts in an attempt to reach Switzerland, but they were captured.

Young Tibor, then 14, was sent to the Mauthausen concentration camp in Austria, where, on his arrival, a commandant told him and his six comrades that none would get out alive. He barely survived the 14 months before the camp was liberated by American soldiers on May 5, 1945.

In a 2013 documentary film, “Finnigan’s War,” about veterans of the Korean War, Corporal Rubin recalled, “I promised the good Lord that if I get out of here alive, I’d become a G.I. Joe, to give back something.”

Corporal Rubin came to the United States in 1948 but was prevented from enlisting until his English improved enough to meet Army standards, which he managed by 1950; he worked for a time as a butcher before he entered the service. The Korean War was in its early stages, but because he was not a citizen, he was not required to fight.

“My commander told me that I didn’t have to go to war,” he said. “So I told him: ‘Well, what about the others? I cannot leave my fellow brothers.’ ”

Chillingly, Corporal Rubin had an enemy on his own side. Numerous reports detail affidavits submitted by his fellow soldiers who described their

commanding officer as a virulent anti­Semite who repeatedly assigned him the most dangerous missions, including one in which he single­handedly held off a wave of North Korean soldiers for 24 hours, securing for his own troops a safe route of retreat.

The affidavits also suggested that though Corporal Rubin was recommended more than once for the Medal of Honor, the same officer, Sgt. Artice V. Watson, deliberately ignored the orders from his own superiors to prepare the appropriate paperwork.

In 2002, after Congress passed the Leonard Kravitz Jewish War Veterans Act — named for a Jewish soldier killed in an act of heroism in 1951 and subsequently denied the Medal of Honor — President Bush ordered a review of the records of 137 Jewish veterans. Corporal Rubin’s case was deemed among the most egregious. At the time, The Jewish Journal, a Southern California newspaper, published a statement from a notarized affidavit about Corporal Rubin and Sergeant Watson.

“I really believe, in my heart, that First Sgt. Watson would have jeopardized his own safety rather than assist in any way whatsoever in the awarding of the medal to a person of Jewish descent,” Cpl. Harold Speakman wrote.

When Corporal Rubin was awarded the medal, an Army spokeswoman told The Los Angeles Times that notarized documents showed that “Rubin’s first sergeant did the circular trash can on these” — that is, the recommendations — “and did not process them.”

“Rubin is a true American hero and deserves this honor,” she said.

(Leonard Kravitz, the uncle of the musician Lenny Kravitz, did not receive his posthumous Medal of Honor until it was awarded by President Obama in 2014.)

Corporal Rubin spent 30 months as a prisoner of war in North Korea, where testimony from his fellow prisoners detailed his willingness to sacrifice for the good of others. He had been steeled for captivity and privation, he said, by his experience in Mauthausen. And he declined the offer of his Communist captors to return him to Hungary, then under the influence of the Soviet Union. Instead, he made a habit of sneaking out of the camp at night and foraging for food, stealing from enemy supplies, and bringing back what he could to help nourish his comrades.

“He shared the food evenly among the G.I.’s,” Sgt. Leo A. Cormier Jr., a fellow prisoner, wrote in a statement, according to The Jewish Journal. “He also took care of us, nursed us, carried us to the latrine.” He added, “Helping his fellow men was the most important thing to him.”

Corporal Rubin’s father died in the Buchenwald concentration camp; his mother and a younger sister died at Auschwitz. He is survived by his wife, Yvonne; a sister, Edith Rittri; a daughter, Rosalyn; and a son, Frank. In addition to his Medal of Honor, he was the recipient of two Purple Hearts.

“I have a mom who was very religious,” Corporal Rubin said in the documentary. “And she always teach us: ‘There is one God, and we are all brothers and sisters. You have to take care of your brothers, and save them.’ To her, to save somebody’s life is the greatest honor. And I did that.”

A version of this article appears in print on December 9, 2015, on page B15 of the New York edition with the headline: Tibor Rubin Is Dead at 86; Award of Medal of Honor Was Long Delayed by Bias.