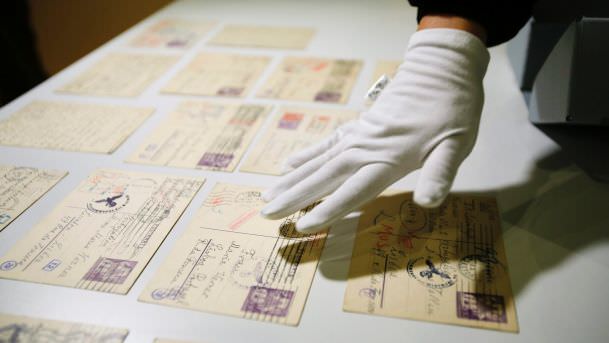 Living in London while her family was trapped in the Warsaw Ghetto during World War II, Tamara Frymer had one line of communication with her beloved back home: postcards.

At the time, all letters going in and out of the ghetto were heavily censored, and no mail was permitted between enemy states. But Frymer found a way.

Her friend Stefan Rogasinski was a junior Polish diplomat working in Lisbon. As Portugal was a neutral country, Frymer would send him money, which he would use to purchase goods to send to her family in the ghetto.
Back came postcards from Frymer’s mother, father and a number of other relatives, made out to an address in Portugal, which Rogasinski would then forward in the diplomatic bag to his friend, Tamara, in London.

“At war, we expect the lines to be cut off,” says Anita Prazmowska, professor of modern history at the London School of Economics, who came into possession of the letters after Frymer passed away, and donated them on Tuesday to the Jewish Historical Institute in Warsaw. “But by this mechanism, on a regular basis, these cards traveled from Warsaw to London.”

The Warsaw Ghetto was not completely sealed off from its surroundings – the walls could be scaled; tunnels were routinely dug underneath them, and the postal and telephone services were still operable, albeit under the monitoring of censors. Yet this rare collection of 39 postcards makes clear that communciation was possible – albeit not simple – between civilians in enemy countries.

“Everything was being done to try to disconnect people from their environment,” says Havi Dreifuss, head of the Center for Research on the Holocaust in Poland at Yad Vashem. “It is heartbreaking to see such great efforts being made to maintain normal communications during these abnormal years.”
The postcards present a unique testimony of the inner workings of the ghetto, and of a family’s struggle to stay in touch and survive.

Because Frymer’s mother, Ester Lebenhaft, “cannot be precise about the difficulties she’s facing, nor about her anxieties, she withholds a lot of emotions,” Prazmowska says. “But anybody can recognize the mother’s pain.”

“I touch and kiss every word you’ve written in your letters,” writes Lebenhaft to her daughter. “I worry about you. Have you got someone who loves and cares for you?” she asks in another. “Don’t feel guilty. You’ve done everything possible.”
In such circumstances “you expect for survival to take over, but it doesn’t; love does. Love is the main theme in these letters,” Prazmowska tells Haaretz.

While the family may have felt free to express their emotions openly, they stopped short of explicitly reporting on the situation in the ghetto and specific Nazi policies, to avoid the risk of the censor destroying the postcards. Instead, they used euphesims and cyriptic language to convey these messages: “We live under the idea of returning to nature,” wrote Tamara’s husband, Hilary Frymer, from the ghetto. Scholars at the Jewish Historical Institute say this was code for “We are dying, we are being killed off.”

Other coded letters include continuous inquiries about family members: “We haven’t seen him for some time” or “He has gone away” was a way of conveying that the person had escaped the ghetto, or was presumed dead, explains Prazmowska.
The Jewish Historical Institute is still investigating the various coded messages conveyed in the letters.

The correspondence testifies to what is known about the conditions in the Warsaw Ghetto – the cold (“…could we possibly get some clothes? Some warm underwear, stockings and a warm blouse or sweater”) and the hunger (“I received two packages of sardines (two cans in each) for which I am eternally grateful”).

Yet they also attest to the inner workings of the ghetto. One cannot survive alone on sardines, chocolate and coffee – the goods sent by Frymer thanks to her friend in Lisbon. Thus, it is understood that the family also traded these products for other vital goods. “There are constant references in the letters to the fact that this was a lifeline,” says Prażmowska.

“These goods were a form of convertible currency.”
Prazmowska adds that the letters “give the sense that the ghetto was not just a place to die; it was a place where people fought to survive.”
While individual letters have survived the Holocaust, it is rare for a large collection of cards – coupled with receipts documenting the transfer of goods into the ghetto – to last.

The documents contribute to the ongoing effort to piece together the complicated puzzle of Jewish life under Nazi occupation, says Dreifuss, who is also a historian at Tel Aviv University and a fellow at the United States Holocaust Memorial Museum.
In September 1943, Rogasinski wrote to Frymer saying he had stopped sending parcels to her family, due to the absense of confirmation that they were being received. It later became clear that this was not long after the Warsaw Ghetto Uprising, following which the Germans razed the ghetto and deported any survivors.

After the war, Frymer learned that her only relative to survive the ghetto was her husband. They later divorced – their marriage had already been failing before the war – and Tamara went on to marry Isaac Deutscher, the well-known biographer of Joseph Stalin and Leon Trotsky, and a prominent left-wing voice in Britain.

It was together with him that she met Anita Prazmowska, who says she knew the couple for some 40 years before Tamara Deutscher passed away. She never spoke of the Holocaust, recalls Prazmowska, except one time when she mentioned her brother’s death. Prazmowska only found out about the postcards after her friend’s death, when her son, Martin, showed them to her. After his death in March this year, Prazmowska, fearing these historical artifacts might be lost, asked the executor of Martin’s will to let her take them to Poland.
The postcards will now go on display at the Jewish Historical Institute and be included in the Central Jewish Library, an online collection of digitized Jewish documents from the Institute’s archives.