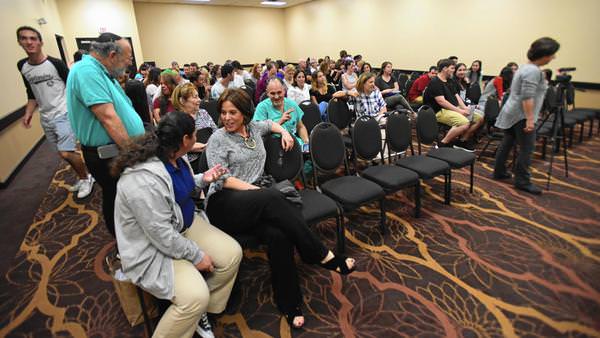 Teens and adults gather to discuss their recent participation in the March of the Living during a program at the Posnack Jewish Community Center in Davie. (STAFF PHOTO/JIM RASSOL)

More than 100 Broward County adults and teens met recently at the Posnack Jewish Community Center in Davie to discuss their emotional reactions and observations regarding their recent 14 day March of the Living program visiting both Israel as well as the concentration camps in Poland to remember the Holocaust.

The March of the Living is an annual education program that brings teens from around the world to Israel and Poland in April to study the history of the Holocaust.

Since the first March of the Living program took place in 1988, more than 261,000 participants went on the same trip as a tribute to all victims of the Holocaust.

New for 2017 was an Adult March of the Living program that had 39 Broward County participants that joined with the 78 teens at the event. Both adult and teen participants were led by officials from the Broward-based Orloff Central Agency for Jewish Education and the Jewish Federation of Broward County.

“This was a life changing experience for both the adults and teens who went on the March of the Living,” said Rabbi Arnold Samlan, executive director of Orloff CAJE and a leader of the Broward Adult March of the Living delegation.

“We want everyone to find your own individual voices. The teens will be in college and will hear many opinions about Israel and the Holocaust. Use your voice from what you learned from the March of the Living and speak up for justice. Take your voice and move your community forward,” said Samlan in addressing both the adult and teen participants of March of the Living.

The March of the Living itinerary is highlighted by the Broward adults and teens joining 10,000 other participants, including Holocaust survivors, on Holocaust Memorial Day in a march from Auschwitz to Birkenau camps in Poland to participate in a ceremony that was televised around the world.

Other itinerary highlights included visiting Jewish sites of interest in Warsaw and other cities in Poland. The participants then went to Israel in observance of both Israel Independence Day and Israel’s Memorial Day.

“I was surprised about the emergence and understanding of many Jews coming together, including Israel Defense Forces soldiers, to the camps in Poland. I personally bonded with everyone and cried for every Jew after visiting the death camps,” said Ivy Feinstein, one of the participants in the Adult MOTL program.

“Although I would not describe myself as a religious Jew, I felt very spiritual by going on the March of the Living. It was exciting to be with the 10,000 teens and 3,000 adults together. I felt like I went on a pilgrimage and feel more committed as a Jew since I returned from the trip,” said Steven Weinberg, who went on the adult trip with his wife Amy.

The Broward teens also stated that the March of the Living trip put a new perspective on their lives.

“I learned not to take anything that is good in my life for granted. I saw too much misery at the death camps and cried. I also put on tefillin and have more respect for Jewish ritual than ever before,” said Teddy Teixeira.

“I never cried so often until I saw the death camps. I will never forget seeing a Holocaust survivor speak of his experiences at Auschwitz in his pajamas to illustrate the horrors he suffered. I felt immensely proud to meet the survivors and felt a closeness to them,” said Rachel Stief.

“I went from the darkness in Poland to the light that was in Israel. It was a change from sadness to hope,” said Jillian Perdeck.

“We learned from Ms. Zisblatt, who lost an identical twin in the Holocaust, about the Nazi doctor Josef Mengele and his experiments with twins to destroy them. It was heartbreaking to hear and we feel empathy for her because we are identical twins,” said Julie Topf.

Teens from Miami-Dade and Palm Beach counties also participated in the MOTL program. In Miami, the title is the Leo Martin March of the Living program, in honor of the late Holocaust survivor and Miami-Dade resident.

The Broward teen and adult MOTL groups gave a standing ovation to Rochelle Baltuch, director of MOTL for Broward County, for planning and organizing the adult and teen trips..