Looking for the light in the dark: A Holocaust survivor’s story 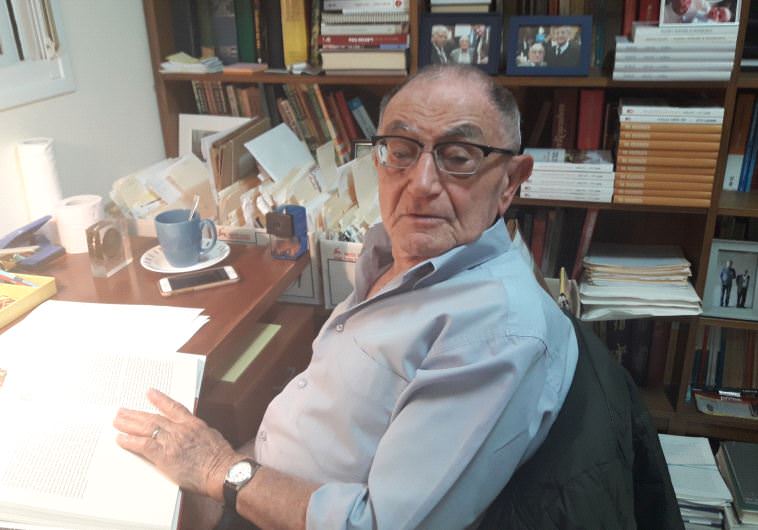 Shimon Redlich, 81, sees his childhood through a complicated prism – through the interplay between Jewish, Ukrainian and Polish relations in wartime Brzezany.

As a Jew who survived the Holocaust in the formerly Polish, now Ukrainian town, Redlich’s own memories can only provide the angle of the Jewish axis. But as a historian, he felt a need to piece together a fuller picture of life in his former hometown, between the years of 1919-1945.

This led him on a journey of discovery back into his past in the town where he grew up, conducting interviews with Poles and Ukrainians who lived there too – Together and apart in Brzezany — as the name of his first book on the subject so aptly puts it.

“I’m a historian so it interested me to check my own history but not only by writing memoirs – I didn’t have enough memories,” he tells The Jerusalem Post during an interview at his cozy Modiin apartment.

“So I was thinking for a long time how to do it without having enough memories. And then I reached the conclusion that I’ll add to my memories, memories of other people – not just Jews, because you can’t understand Jewish history if you don’t study the history of your neighbors.”

Redlich has fond memories of his pre-war childhood, and even during the war, most of which he spent as small boy in hiding, he remembers moments of happiness. He has also made a point of highlighting the two families who saved his life – one Polish and one Ukrainian.

It took him many years, however, to get in touch these families, having moved to Israel in 1950 and focusing on his life here.

“For many years I didn’t think about Ukraine,” he tells the Post,acknowledging that he may well have repressed memories of the Holocaust. I was busy studying and then raising a family.” Redlich holds degrees from Hebrew University, Harvard University and New York University. “Only in the 1980s, I started looking back and thinking about those times. And then there were changes in politics and government in eastern Europe which enabled me to look for the people who saved me  – Tanka and Karol.”

Redlich, now a history professor, owes his life to both a Polish family and a Ukrainian one. Stanisław Codogni and his son Karol helped save Redlich’s family when they were hiding in an area of the liquidated Brzezany ghetto, by providing them with food for six months.

This act of brave kindness, which was a risk to their saviors’ lives, was inspired by a friendship between Redlich’s beloved grandfather Fishl and Stanisław, a blacksmith. Redlich’s father was shot dead in a roundup on June 12, 1943. Redlich, his mother and grandparents hid in their spot in the ghetto until it was no longer safe.

Redlich and his mother were saved a second time by Tanka Kontsevyh, a Ukrainian woman who had fallen in love with Redlich’s uncle, and was already hiding him and his wife. She opened her house to the rest of the family too, but Redlich’s grandparents were found and executed on their way there.

After Redlich found his saviors years later, he maintained regular contact with them and also helped them financially. The Polish father and son are no longer alive but Redlich is still in touch with Tanka’s daughter Anya, for whom he applied and received the title of Righteous Gentile, along with Tanka, Stanisław, and Karol.  Redlich has further canonized the heroic acts of these four people through a documentary called Shimon’s Returns.

Redlich has been back to Ukraine many times and met with Anya just a few months ago. He is a fervent believer in highlighting the positive, even — or particularly– during such a dark passage of history as the Holocaust. As he said publicly in a recent appearance he made on a popular Ukrainian TV show, Shuster Live, “it’s important to show future generations not only evil among men but also humanitarian behavior.”

Redlich notes that when talking to Jews, he always tells them about how he was saved. But when he talks to Ukrainians, he says that it’s important to look at the truth. His guest appearance on the show was in honor of the 75th anniversary of the Babi Yar massacre, which was marked in Kiev by a week of commemorative events in September. After years of buried history under Soviet Union rule, regarding crimes against the Jews on Ukrainian soil, the emphasis the Ukrainian government put on the commemoration was of great significance.

But Ukrainian responsibility for some of those crimes against Jews remains a sensitive subject, and President Reuven Rivlin touched a nerve when he told the Ukrainian parliament last month that “Many of the collaborators were Ukrainian.” “I’m not so sure about the adjective ‘many,’ says Redlich, expressing slight disappointment in that aspect of the president’s speech. He has since sent Rivlin a copy of his book, along with a letter and an invitation to discuss such issues.

“One message I wanted to deliver to them [the Ukrainian audience] was to face the past truthfully, what for years they already achieved in Poland,” he says on the subject of responsibility for crimes during the Holocaust. Appearing on the same show was a guest who maintained that Ukrainians had always been friends of the Jews.

On the other hand, Redlich encourages youngsters “to look into the future, not to deal all the time with the evil tragedy of the past but to take some of the positive elements even from those bad times and to use them for the young generation.” One role model whom Redlich believes the young generation should look to, is Andrey Sheptytsky, the late Metropolitan Archbishop of the Ukrainian Greek Catholic Church who sheltered hundreds of Jews during the Holocaust. There is a picture of Sheptytsky hanging in Redlich’s office.

Redlich notes that many Jews his age tend to shy away from encounters with Poles and Ukrainians – still holding on to negative views of them shaped by their past. He’s also received criticism for his own warmth toward people from those communities, particularly when showing his film to other Holocaust survivors; in his documentary, Redlich dances with Ukrainian women. “For a person with prejudice against any Ukrainian, to see me singing and dancing with any Ukrainian is not acceptable,” he says.

“You’ll hear people say ‘Poles are anti-Semites and Ukrainians are murderers of Jews, but I don’t accept these generalizations and stereotypes, that’s why my line is different from prevailing views,” he explains. He acknowledges that his open approach was influenced by the fact that he was saved by Poles and Ukrainians, but also says that as a historian, he tries to bring balance to stereotyping.

Redlich strives to bring people together, in any way he can. He held a screening of his film in London, an event which drew Poles, Jews and Ukrainians. “They had a very good discussion and it was the first time that they all came together,” he notes. “If you don’t meet, you have an image of the other as  something threatening.”

“Make love not war, that’s my slogan,” he says. “Despite all, I’m still optimistic about people.”