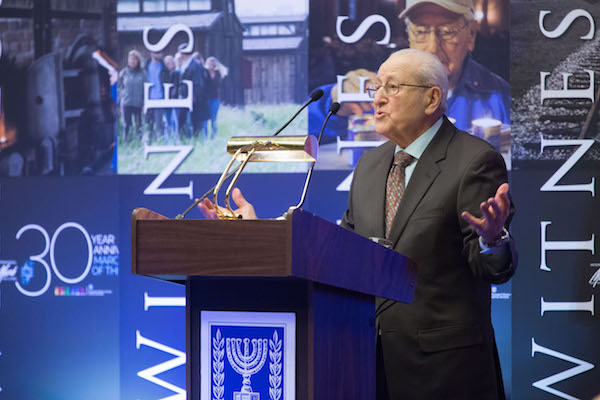 ‘As the last of the Holocaust survivors slowly leave us, the experiences of young people who have joined them and visited the sites where unimaginable horrors took place are more important than ever’

Israel’s Permanent Mission to the United Nations hosted a special exhibit commemorating the International March of the Living’s 30th anniversary on Monday.

The evening ceremony incorporated spoken presentations, video tributes and musical presentations by past participants, including students and survivors who shared their experiences with more that 400 guests at United Nations Headquarters.

“As the last of the Holocaust survivors slowly leave us, the experiences of young people who have joined them and visited the sites where unimaginable horrors took place are more important than ever,” Ambassador to the UN Danny Danon said at the opening of the exhibit.

“By hearing the stories of the survivors, and vowing to bear witness to future generations, these young people ensure that the chain of memory will not be broken and allow us all to fulfill our vow of ‘never again.’”

The International March of the Living is an annual education program that brings individuals from around the world to visit Poland and Israel to study the Holocaust and tour German death camps on Holocaust Remembrance Day.

The program has already completed 29 marches, bringing over 260,000 participants from 52 different countries since its inception, according to the organization’s website.

The ceremony was held just days before the United Nations is set to honor International Holocaust Remembrance Day with a scheduled event on Wednesday.

One of those survivors, Irving Roth, who first participated in March of the Living in 1998, honored attendees by recounting the details of his harrowing journey to the infamous German death camp Auschwitz as a young boy.

“In the distance I see flames coming out of chimneys,” Roth said to a packed audience inside UN’s General Assembly Hall. “I’m 14 years old there without my parents… Suddenly I am separated from grandfather and grandmother, they are marching to the right to those buildings with chimneys and flames. Where are they going what is that place, my brother and I are separated and moving to the left, to another part of the camp. This place is Auschwitz!”

Chairman of the International March of the Living and special guest of the event, Dr. Shmuel Rosenman, said the exhibition is meant to reflect the “connection that was made with the youth over various trips and emphasizes the legacy and message of Elie Wiesel” who said “When you listen to a witness, you become a witness.”

“This is especially important today as waves of anti-Semitism are rising in the world and neo-Nazi groups are rearing their heads,” Rosenman added.

President of the International March of the Living, Phyllis Heideman, ended the evening by delivering a powerful speech that articulated the importance of the organization’s work, reminding guests that mortality is claiming the world’s last generation of Holocaust survivors.

“Aware that we hold in our hands one of the greatest tools to ensure the future – education – we have committed ourselves to relay to the next generation the importance of collective memory and communal legacy,” Heideman said.

“The study of the Holocaust and its lessons is the only, and last, hope of all mankind,” she continued. “If we do not succeed in passing the torch of memory to future generations throughout the world, the lesson will not be learned.”

The event was nearly thrown into chaos earlier this month after one of the scheduled performers, singer and songwriter Amir Benayoun, was denied a US travel visa.

At the time, the American mission in Israel said Benayoun did not sufficiently prove he was intending to return to Israel, but the singer claimed the refusal was for political reasons.

But on Friday, the US consulate switched course and granted the singer a travel visa, who traveled to New York to deliver his performance.

“I’m happy to represent my land and my nation at a ceremony in honor of Holocaust victims,” Benayoun said in a Friday statement. “What’s done is done and we have an important task ahead of us.”