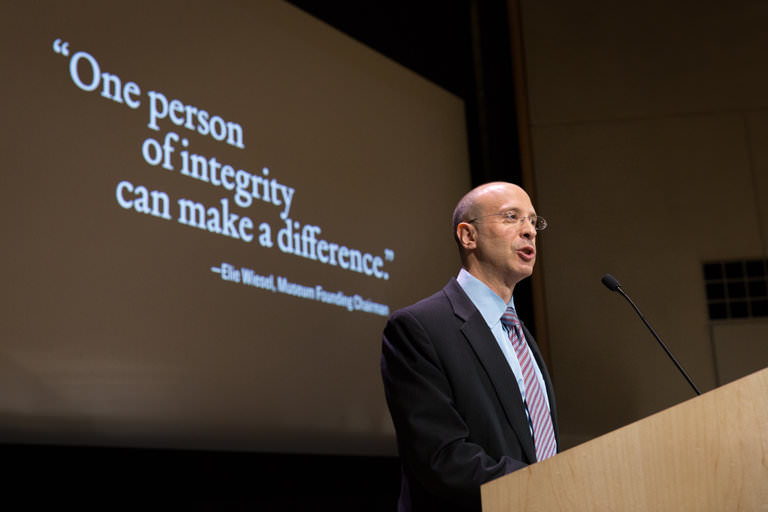 Five months after his death, Elie Wiesel’s family gathered in DC on Wednesday with prominent political figures from the writer and Nobel laureate’s adopted country to honor his contributions to Jewish history and memory.

Mr. Wiesel was born in Romania, survived the Auschwitz and Buchenwald concentration camps and spent considerable time in Europe and remote corners of the world after World War II. The tributes he received spanned the whole of his political and literary life, but many of the speakers at the United States Holocaust Memorial Museum talked of how he made America his home after moving here in 1955.

As a journalist in New York, he discovered the pleasures and contradictions of American life on road trips across the country: the dreaminess of Disneyland, where he said he had visited his childhood; the cruelty of Southern racism that made him feel “shame for being white”; the surprise of meeting a Holocaust survivor on an American Indian reservation in Arizona, after which he joked, “America is truly a wonderland. Even the Indians speak Yiddish.”

But his relationship with his new home was established before he even visited it, on April 11, 1945, when the United States Third Army liberated Buchenwald. As several speakers said on Wednesday, Mr. Wiesel lived his entire adult life with that image of American heroism.

“Like lost children, the American soldiers wept and wept with rage and sadness. And we received their tears as if they were heart-rending offerings from a wounded and generous humanity,” Mr. Wiesel once wrote.

Samantha Power, the American ambassador to the United Nations, told of Mr. Wiesel’s quest to call attention to his most famous work, “Night,” a memoir recounting daily life in the camps that was published at a time when the word “Holocaust” was not yet a part of common American discourse.

“Sitting here, it can be hard to imagine that there was a time when the prevailing wisdom was not to bear witness,” she said. “But that is precisely what it was like when Elie was writing. Survivors did not speak about their past even to their own children. Here in the United States, there were no memorials to the six million Jews who had been killed. It was against this wall of silence that Elie wrote.”

Ms. Power explained how publishing houses eschewed the proposal for the book, which had been translated from Yiddish: “When Elie went in search of an American publisher, he later recalled their rejection letters often noted that American readers ‘seemed to prefer optimistic books.’”

Representative Nancy Pelosi, Democrat of California, hailed Mr. Wiesel’s “moral candor.” Senator Orrin Hatch, a Utah Republican, said that “the rising tides of hatred beckon at our doors still,” and thus “the world we live in today would benefit more from Elie’s life.”

Choking up, Ms. Power emphasized Mr. Wiesel’s place in literature as a critical part of an American education.

“As our nation goes through difficult days, ‘Night’ is a book that is firmly ingrained in that small canon of literature that kids and young adults read when they are growing up in America,” she said. “Alongside Atticus Finch and Scout, one of the narrators that will have an early shot at shaping our children’s moral universe is 16-year-old Elie.”

Mr. Wiesel thought of the Holocaust museum as his lasting contribution to his adopted country. He played a seminal role in 1980 as chairman of its memorial council, overseeing the building’s development. At the museum’s opening in 1993, Mr. Wiesel said it “is not an answer; it is a question mark. If there is a response, it is a response in responsibility.”

“Elie never hesitated to be bold in what he called ‘the most important project of my life,’” said Tom Bernstein, the chairman of the museum’s governing council.

It was the speaker closest to Mr. Wiesel who turned most political, pleading with the crowd to follow Mr. Wiesel’s example in pursuing social justice in America.

“When Syrian refugees need our help,” his son Elisha said, “we must help them. When Muslims in our midst are made to feel that they won’t have the same rights as the rest of us, we must embrace them. When children of hardworking, law-abiding undocumented immigrants fear deportation, we must insist on compassion.”