Germany Confronts, in Unique Exhibit, Its ‘Holocaust of the Bullets’ 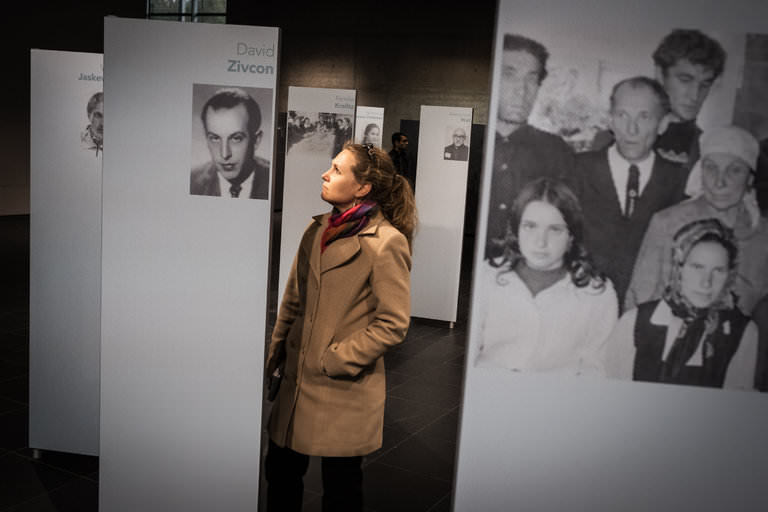 BERLIN — In this city laden with history, they were just two events recalling a heinous past: one, the opening of a public exhibition calling for a reckoning with a particularly brutal period of the Nazis’ rule; and the other, a modest remembrance of one Holocaust victim. Both channeled questions ever present here: Why did Germans under Hitler abandon their humanity — and who and what survived?

The exhibition, which opened late last month, confronts the mass murder of Jews and other minorities after the Nazis invaded the Soviet Union in June 1941. For all the attention paid to the past here, this display is the first in Germany to focus solely on those executions of more than two million people. Their bodies fell into pits, which were then covered and left as anonymous mass graves.

This “Holocaust of the bullets,” as it has come to be known, is deeply familiar to citizens of the former Soviet Union, particularly in Ukraine, Belarus, the Baltics and large parts of western Russia. The very oldest people in those places have vivid, direct memories; those who are middle-aged were raised on Soviet documentaries and war movies; and the young are exposed to modern displays of remembrance.

In Germany, however, the mass shootings are less known than the gas chambers and horrors of Auschwitz, Treblinka and other camps in Nazi-occupied Poland.

At the opening of the exhibit, Foreign Minister Frank-Walter Steinmeier used the occasion to link the past and the present. Since 2014, with the outbreak of hostilities in Ukraine, Europe has again had to face “the question of war and peace,” Mr. Steinmeier said. He said nine towns that he had visited in the past year in Ukraine and the region lost more than 180,000 inhabitants during the Nazi invasion.

In these “wounded landscapes” of “the forgotten Holocaust,” Mr. Steinmeier said, “this exhibit removes the layers and brings to light, layer by layer, the details of a past which is not just an eastern one, but also ours.”

“Without consciousness of those layers under the landscape, we Germans can never do justice — no matter how honest the effort to understand the region and the role we play there,” Mr. Steinmeier said. “We Germans know the stories and the scars much less well than we like to think.”

The new exhibit in Berlin is contained within the Topography of Terror, a permanent display that chronicles the Nazis’ rise, rule and fall. It stands, fittingly, where the Gestapo headquarters once did.

The special show — “Mass Shootings: The Holocaust From the Baltic to the Black Sea 1941-1944” — was mounted in cooperation with the foundation behind the nearby Memorial to the Murdered Jews of Europe.

Andreas Nachama, the director of the Topography of Terror, said at the opening that the exhibit bore “a sad relevance,” an allusion to the rise of right-wing populism today. At the entrance, a map shows 722 places where more than 500 people were killed by the Nazis’ firing squads.

“The map illustrates how bitter the history is, and how difficult it was to mount this exhibit,” Mr. Nachama said.

In one corner, the historians who mounted the show have reproduced Page 6 from The New York Times of Oct. 26, 1941. In a rare early mention of the mass killings of Jews, citing letters reaching Hungary and witnesses’ accounts from Hungarian officers, an article on the page briefly reports the execution of up to 15,000 Jews in Kamenez-Podolsk, or Kamianets-Podilsky, in western Ukraine.

The article appears next to ads for fine furs and clothing from Russeks, a large Manhattan store. “Presumably,” the catalog notes, “the newspaper did not inform the Jewish family Nemerov-Russek where their advertisement was going to be placed.”

Ulrich Baumann, one of the historians involved in the exhibit, said he felt the comment was needed. “At first glance, it is shocking,” he said, noting that the article was small compared with the ads. “We try to think along with the visitor, and what questions and misunderstandings may arise.”

To judge by the solemn and attentive visitors viewing the exhibit on the first Sunday it was open, early this month, it hits home with foreigners and Germans alike.

Joshua Bagetti, 27, an electrician visiting from Brisbane, Australia, seemed dazed. He was, he said, stunned to see how rapidly the Nazis had invaded “and how far down south they went” — through the Caucasus to bump up practically against the Middle East.

Three 20-year-olds from around Cologne who were in Berlin for job training included the exhibit in their plans for their visit, said Christine Gronemann, one of the three. Ms. Gronemann praised the attention to details and the decision to show this history, which was not much covered in German schools. But their lessons did make one thing plain, she said: “It was very clearly stated that Nazism, and everything to do with it, is not good.”

Being taught about the Holocaust, and Germany’s guilt, is a ritual of adolescence here. Students visit former concentration camps or memorials to smaller camps. If a school and its community can manage it, students go to Israel. Holocaust survivors, their numbers dwindling, are honored guests at German schools.

Margot Friedlander, 94, is one such survivor. Born in Berlin, she was hidden by Germans from 1943 to 1944 and then deported to Theresienstadt, the camp north of Prague where she met her future husband, Adolf Friedlander.

A rabbi married them in spring 1945 in Theresienstadt, and the next year they left for New York, where her husband helped run the 92nd Street Y for 28 years. After he died in 1997, she started writing her memoir, eventually published in German.

That led to a trip to Berlin, and a decision to stay. Visiting schools is perhaps the most important part of her new life, she said, “because they are the future.”

Ms. Friedlander was attending a gathering of about 60 people one Saturday morning in September. The crowd had assembled first outside the elegant apartment building at Augsburger Strasse 21 and then moved inside to the apartment where Walter Serner, a Dadaist writer, once lived.

Although Serner, born Walter Seligmann in Bohemia, converted to Catholicism in 1909, to the Nazis he was a Jew. In 1942, after an itinerant life, Serner and his wife were arrested and sent to Theresienstadt, and then on to the Latvian capital, Riga. Along with the 900 or so other Jews on their transport train, they were shot in a forest outside the city in August 1942.

The small ceremony to honor Serner was almost entirely made possible by the enthusiasm of Andreas Mosbacher, a judge and law professor who was struck several years ago by Serner’s work and fate.

What works might Serner have written had he lived, the guests wondered. “No one — or very few — has heard of him now,” Judge Mosbacher said. Like much of the art created in Theresienstadt, Serner’s writings attest to a use of the German language and artistic endeavor that has now withered.

In this respect, did Hitler’s efforts to mold German culture triumph?

Not if you listen to Ms. Friedlander, who has faith in the young. “What was, was,” she said. Now, “they are the ones who must shape society.”