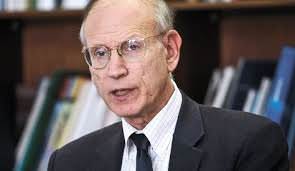 New York, NY – Monday, November 16, 2015 – The International March of the Living, a leading institution in Holocaust education, announced that Ambassador Stuart E. Eizenstat has been appointed as Honorary Chairman of the 'Campaign for the Future'. As a Special Advisor on Holocaust Issues, Eizenstat is committed to the mission of this annual program which brings individuals from around the globe to Poland and Israel to study the history of the Holocaust and to examine the roots of prejudice, intolerance and hate.

"The International March of the Living is proud to have Ambassador Stuart Eizenstat assume the helm of our Campaign for the Future,” said World Chair, Dr. Shmuel Rosenman. “Ambassador Eizenstat has been a long-standing leader in the world arena and his commitment to Holocaust memory and legacy is in perfect harmony with the mission and goals of this organization. On behalf of the MOTL Board, Staff, world leadership and alumni, we welcome his recognition of the work we do and the importance of our role in the future of Holocaust education. We look forward to setting new standards and reaching new heights under his Campaign Chairmanship."

An expert on Holocaust-era Issues, providing belated justice for victims of the Holocaust and other victims of Nazi tyranny during World War II, Eizenstat has negotiated major agreements with the Swiss, Germans, Austrian and French, and other European countries, covering restitution of property, payment for slave and forced laborers, recovery of looted art, bank accounts, and payment of insurance policies.

Ambassador Eizenstat served as chief White House domestic policy adviser to President Jimmy Carter (1977-1981); U.S. Ambassador to the European Union, Under Secretary of Commerce for International Trade, Under Secretary of State for Economic, Business and Agricultural Affairs, and Deputy Secretary of the Treasury in the Clinton Administration (1993-2001).

“Assuring Holocaust justice for survivors and for the families of victims and perpetuating the memory of the Holocaust has been a central part of both my public and private life,” said Ambassador Eizenstat. “Because of this, I am particularly honored to be able to serve as the Honorary Chairman of The International March of the Living ‘Campaign for the Future’, which is one of the most important ways to assure that the memory of the Holocaust and its contemporary lessons are imparted to future generations. Since its inception in 1998, over 200,000 people from over 52 countries have attended. A recent study validates the impact on Jewish identity and the participant’s commitment to the State of Israel and the future health and vibrancy of the Jewish world. Few other institutions have had this dramatic and lasting impact on young Jews around the world.“

The 2016 March of the Living will take place on Thursday, May 5, 2016. Since the first March of the Living in 1988, over 200,000 participants, from 52 countries, have marched down the 3-kilometer path leading from Auschwitz to Birkenau on Holocaust Memorial Day, in silent tribute to all victims of the Holocaust.

JOIN THE CAMPAIGN FOR THE FUTURE