Amb. Danny Danon Keynote Remarks at the United Nations for March of the Living 30th Anniversary 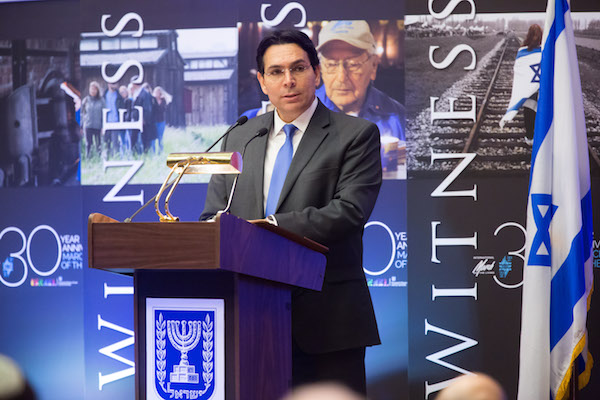 Thank you all for being here.

It is a privilege to join hands with the March of the Living organization, and so many distinguished guests for this milestone.

Phyllis, Richard, Shmuel – you are truly remarkable. Your leadership, bravery, inspiration and spirit cannot be matched. It is you who leads the way as we turn the candles of remembrance into guiding lights for the future. We are truly grateful for your vision.

I would also like to welcome four guests who have traveled here all the way from Israel: David D’or, Miri Mesika, Amir Benayoun and Moshe Klugaft. I know it was not easy for you to get here, but we are honored to have you with us. ברוכים הבאים!

Later this evening, David, Miri and Amir will perform the live debut of their new single, written by Moshe, “The Last Survivor.” They will perform it in Hebrew, Arabic and English.

Over the past few days, we have witnessed dangerous attempts to distort the truth and rewrite history.

Here, in the United Nations, the organ established precisely because of the greatest tragedy mankind has ever known, we have an even greater responsibility to oppose any and all attempts to falsify history.

Every day, and especially on this day, it is more crucial than ever to remember those who perished, and continue to preserve and protect the truth.

It is our moral duty to do all in our power to ensure that history never repeats itself. 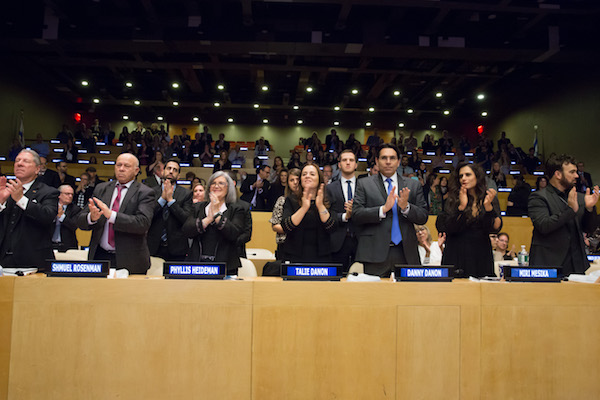 Tonight, we mark the official commencement of the March of the Living’s thirtieth anniversary. As many of you know, this year we are also celebrating seventy years since the establishment of the State of Israel. Seventy years since our vibrant, thriving Jewish homeland was reclaimed and reborn.

No longer would the world’s Jews need to run away from their homes. Instead, they could return, in record numbers, to what had always been their rightful home.

There is a special strength in numbers.

A special, unbreakable force of unity when people stand strongly together, just like they do at the March of the Living.

260,000 people, from fifty-two countries – young and old; religious and secular; Jews and non-Jews; students and survivors – they have marched together in solidarity.

Students and survivors, hand-in-hand, face the atrocities of Auschwitz-Birkenau. But they also, together, celebrate the rebirth and renewal of the Jewish people through the State of Israel.

Numbers, like those of the March of the Living, are a sign of strength. But there can also be a dark weakness in numbers. We cannot ignore it. And we cannot truly feel its effect until we see it with our own eyes.

I saw it as Deputy Defense Minister, when I went to Poland to represent the Israeli government at Auschwitz-Birkenau.

Thousands more have seen it on the March of the Living – the March that warns us that numbers can numb humanity.

Numbers can steal the identities of individuals. Numbers can turn people into items – items for organization; for manipulation; for disposal.

Numbers can show up as tattoos, branding the arms of men, women and children like animals. Numbers can be exploited as tools of evil. Tools of Nazi killers to slay.

The Nazis did not see the Jews as people – as mothers and fathers; as teachers and students; as poets, comedians, politicians, bankers and philosophers.

They stripped them of their identities. They forced them to wear the yellow star. They shoved them into ghettos. They pushed them onto trains like cattle. They ripped the humanity from their hearts, minds and souls. They turned them into numbers.

Only then, when they were stripped of all traces of dignity, did the unspeakable atrocities consume their remains.

The bodies and spirits of six million Jews, from twenty-nine countries, including over a million Jewish children, turned to ashes.

The March of the Living leaves us with many lessons about numbers. And despite all the pain, despite all the suffering, it has left us with an uplifting lesson about numbers: the Jews may not be many in number, but we are mighty in spirit. That spirit is what kept us fighting for so many years. It brought us from Poland to Israel.

The Jewish people are safer because of the State of Israel. It is our place to go. It is our home. We may have fallen back at the hands of slaughter. But we never gave up. We rebuilt our dignity.
That is why at this year’s March of the Living, we invite all United Nations ambassadors to join us.

Israel’s President Reuven Rivlin will lead the historic thirtieth March of the Living from Poland to Israel. We hope to march, hand-in-hand, with as many UN ambassadors as possible. We will march so that we can build up the community of witnesses.

Every day the number of Holocaust survivors grows thinner. We have fewer witnesses than ever to tell us about the atrocities – to remind us never to forget.

We must document the stories and preserve the memories. Because this will not be the last time we face danger.

When asked by a group of young people about lessons to learn from the Holocaust, former Israeli Prime Minister Menachem Begin once warned, and I quote, “If an enemy of our people says he seeks to destroy us, believe him. Don’t doubt him for a moment. Don’t make light of it. Do all in your power to deny him the means of carrying out his satanic intent.”

That is why we need witnesses. To know the truth. To rise up when evil lifts its ugly head. That is why the March of the Living is so important.

Together, we will use our strength in numbers to continue listening to the voices of the past, so that we can protect the generations of the future.

Danny Danon is Israel’s Permanent Representative to the United Nations. Danon previously served a member of the Knesset from the Likud Party, as Minister of Science, Technology and Space and as Deputy Minister of Defense. During his term in the 18th Knesset, Danon served as Deputy Speaker, Chair of the Special Committee on the Rights of the Child, and Chair of the Committee for Immigration, Absorption and Diaspora Affairs. In June 2016 Danon was elected as chair of the UN’s Legal Committee, the first Israeli to ever hold the position.